Even the credit rating agencies smell trouble, and of course, the rating companies are always the last to know.  Moody's predict a revenue downturn for colleges and universities--yah think?

But we know higher education is in real trouble when the football coaches take salary cuts--and that's what's happening at Louisiana State University. Yesterday, the LSU Athletic Department announced that all employees making $80,000 or more will take a 5 percent pay cut.

And that includes Saint Ed Orgeron--who led the LSU Tigers to the National Championship last year--opening up the heavens and inspiring the angels to sing celestial hallelujahs.  Ed makes $6 million a year and is giving up $300,000.

But there's more.  No bonuses for the coaches who have winning seasons.  Staff layoffs. According to the Baton Rouge Advocate, Jason Suitt, the Assistant Athletic Director of Fan Engagement, will lose his job.

I wonder what the Assistant Athletic Director of Fan Engagement does. Is he the guy who priced the stadium beer at six bucks a bottle?

Don't get me wrong. I love college football. In fact, I just completed a language emersion course in conversational football and can now talk confidently about the red zone, the bootleg play, and running the ball up the gut.  I even know what "pick six" means.

And I don't want to see people lose their jobs.

But even college football's most avid fans must realize that things have gotten out of whack.  Forty-five million Americans now owe $1.7 in student-loan debt. Until this year,  colleges did almost nothing to keep costs down. Meanwhile, the universities built palatial athletic facilities and paid coaches princely salaries.

And now my local newspaper tells me that the Tiger Athletic Foundation is urging wealthy fans to contribute to a "Victory Fund" to shore up LSU's sports programs.  Their donations will be tax-deductible.

Think about that. Two of my relatives work at LSU and haven't received a pay raise in years. Recently they learned that their property taxes are going up.

There's something wrong with the world when university employees struggle to pay their bills while their employer's athletic foundation encourages rich people to make tax-deductible donations to support the friggin' football program. 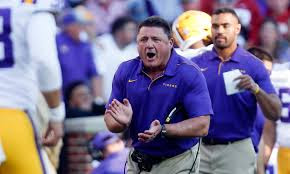