Sue Reagan is 60-years old and lives in a mobile home on rented land. She has a part-time job but lives near or below the poverty line. She took out student loans to obtain a bachelor's degree in administration of justice and a master's degree in criminology, but that was long ago.

Unable to pay back her student loans under a standard ten-year repayment plan, Reagan signed up for an income-based repayment plan (IBRP). Her income is so low, however--$1,286 a month--that her monthly payments are zero dollars.

Reagan filed for bankruptcy and brought an adversary action to discharge her student loans. She argued that her student loans constituted an undue hardship and that she could not maintain a minimal standard of living and pay back those loans.

Educational Credit Management Corporation, her creditor, filed a motion for summary judgment and asked the bankruptcy court to dismiss Reagan's case without a trial.  ECMC argued that since Reagan's monthly payments were zero dollars, she could not reasonably argue that her student loans constituted an undue hardship or that her loans forced her below a minimal standard of living.

But Bankruptcy Judge Gregory Taddonio disagreed with ECMC and refused to dismiss Reagan's case. In Judge Taddonio's view, it did not matter which debt drove Reagan to the edge of poverty. "If she finds herself financially underwater, the question of which obligation pushed her below the surface matters little. To a camel whose back is already broken, any straw in his pack is unwelcome."

Who knows? ECMC's motion to dismiss was merely the first of many arguments ECMC will make to defeat Reagan's attempt to shed her student loans. And ECMC has unlimited resources. It can hound Reagan for years right up to the Third Circuit Court of Appeals. 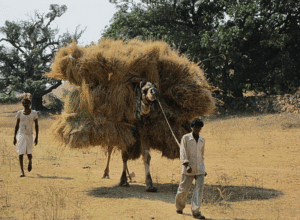 Posted by Richard Fossey at 12:40 PM No comments:

Many years ago, when I was a first-year law student at University of Texas, Professor Robert Hamilton, my law instructor, told our class of first-year students not to work while in law school. Working part-time, Professor Hamilton said, would distract us from our studies and degrade the quality of our law-school experience.

I remember thinking that was good advice for people from wealthy families, but it wouldn't work for me. I began working 20 hours a week at the Texas Attorney General's Office just as soon a finished my first year of classes; and I also got a work-study job at the law school.

In those hoary old days, students could actually work their way through college and even law school. My law-school tuition was only $1,000 a year, and by working part time, I graduated from law school with no debt.

Today, students are still working while in college, but their part-time jobs don't begin to cover the cost of tuition. Thus, even working students take out loans.

According to a recent HSBC report, 85 percent of current college students are working part-time jobs. In fact, they spend far more time working than attending classes or studying. On average, students work 4.5 hours a day, almost twice as much time as they spend in classes.

But those part-time jobs working as waiters, pizza cooks, rental-car agents, etc. hardly cover basic living expenses--food, shelter, cell phone, car insurances, etc. And so most students are borrowing to pay tuition. In 2017, college graduates finished their studies owing an average of almost $40,000. And that doesn't include credit card debt, averaging about $4,000.

A perception still exists that going to college and professional school is a time of awakening intellect when students develop personal and vocational identities sitting at the feet of wise and learned scholars. But that time is long gone--if it ever existed.

Today, students are stressed out by their college experience. Six out of ten report feeling anxious about financial concerns either frequently or all the time. And women report more financial anxiety than men.

Going to college now is like running a gauntlet between rows of vicious bureaucrats and money lenders trying to beat the student down. Some people survive the experience relatively unscathed and go one to get jobs that allow them to pay back modest of amounts of student debt.

But a growing number of young people finish their post-secondary studies worse off than before they first enrolled. They borrow far too much money and graduate with no skills and no idea what they want to do for a living. In some instances, students' parents get sucked into the maw of college debt, taking out Parent PLUS loans they can't pay back.

Indebted college graduates who don't find good jobs are often forced to obtain economic hardship deferments on their student loans, excusing them from making payments while the interest accrues. Others get pushed into 20- and 25-year repayment plans that are structured so that their debt keeps growing even if they faithfully make their monthly payments. And about one million people a year simply default on their loans--essentially committing financial suicide.

The higher education flacks say over and over that a college education is a ticket to a good job and a middle class lifestyle.  And for some people that's true. But its not true for everybody.

For millions of people, their college experience is nothing but a scam, and this is disproportionately true for women, minorities, and people from low-income families.


Posted by Richard Fossey at 8:39 AM No comments:

You remember that great scene from the movie Dr. Strangelove.  U.S. President Muffley (played by Peter Sellers) worries about the consequences of nuclear war with Russia. "You're talking about mass murder," President Muffley muses.

But General Turgidson (played by George C. Scott) is not concerned. "I'm not saying we wouldn't get our hair mussed. But I do say no more than ten to twenty million killed, tops."

Betsy DeVos is our modern day General Turgidson. The student loan program is shattering the lives of about 20 million Americans.  But in DeVos' mind, that's a small price to pay for a program that enriches her buddies in the for-profit college industry.

And so without further ado, I will summarize the Department of Education's most recent report on the student-loan debacle.

Income-Driven Repayment Plans. As DOE reports, more and more distressed student borrowers are being herded into income-driven repayment plans (IDRPs). As of June, 7.1 million people are enrolled in IDRPs, a 20 percent increase from just a year ago.

Student borrowers in IDRPs are America's new serfs. They pay a percentage of their income for 20 or 25 years to repay the student loans they took on to attend some raggedy-ass college that didn't prepare them for a job.

Of course, IDRP monthly payments are generally low. In fact, IDRP participants who live below the poverty line make monthly payments of zero. But virtually everyone in these plans--7.1 million suckers--will die without ever paying back their loans. In fact, for most of them, their loan balances are going up with each passing month due to unpaid accruing interest.

Borrower Defense to Repayment. According to DOE, 166,000 student borrowers filed so-called "borrower defense" claims. These claimants are seeking loan forgiveness on the grounds they were defrauded by the colleges they attended. Thousands of these claims were filed by people who attended just two for-profit institutions that went bankrupt: Corinthian Colleges and ITT Tech.

As of June 30, two thirds of these claims are still pending, and only 80 percent of the processed claims were approved.  Meanwhile, borrowers who have pending claims are still obligated to make their monthly loan payments.

Delinquency Rates. Delinquency rates are down slightly, DOE assures us, but almost a quarter million borrowers defaulted on their student loans during the third quarter of this year.  That's 2755 people going into default every day.  A high percentage of these defaulters attended for-profit colleges. But apparently those casualties are acceptable to Betsy DeVos.

Hundreds of thousands of student debtors have taken jobs in the public sector in belief that their student loans would be forgiven after 10 years under the Public Service Loan Forgiveness Program (PSLF). It now seems they were deluded.

PSLF was enacted by Congress in October 2007, so the first people entitled to PSLF relief became eligible in October 2017. So far, 28,000 people have applied for PSLF relief, but only 300 claims have been approved and only 96 people have actually had their loans forgiven!

If Betsy DeVos and her gang of former for-profit-college hacks continue to refuse to implement PSLF in good faith, hundreds of thousands of college borrowers who relied on PSLF will suffer incalculable hardship.  For example, thousands of people have graduated from third- and fourth-tier law schools with six-figure debt, and they can't find law jobs in the private sector that pay enough to service their student-loan obligations. As Paul Campos pointed out in his book Don't Go to Law School (Unless), PSLF is these people's only viable option for paying off their law-school loans.

Conclusion: The Student Loan Program is in Fine Shape: "10 to 20 Million Casualties, Tops!"

DOE's own data shows us that the federal student loan program is a disaster: high default rates, income-driven repayment plans that don't allow people to pay off their loans,  borrower-defense rules that DOE administers incompetently, and a PSLF program that DOE refuses to implement in good faith. Meanwhile, the for-profit gang is getting rich.

Posted by Richard Fossey at 9:11 AM No comments:

ECMC has appeared in literally hundreds of student-loan bankruptcy cases, and it knows all the legal tricks for defeating a student-loan borrower's efforts to discharge student loans in bankruptcy. And most of the time ECMC wins its cases.

Rowe declared bankruptcy and filed an adversary proceeding to discharge the student loan ECMC claimed he owed. A trial date was set, but neither Rowe nor ECMC filed the disputed loan document with the court.

Judge Furay ordered the parties to file briefs on the burden of proof and concluded the burden was on ECMC to prove Rowe owed on the student loan. Since ECMC did not produce the loan document, Judge Furay discharged the debt.

What the hell happened?

How could ECMC,, the most sophisticated student-loan debt collector in the entire United States, not produce the primary document showing Rowe had taken out a student loan?

I can think of only two plausible explanations. First, ECMC may have had the loan document in its possession but didn't produce it because the document would show Rowe was right-- he hadn't signed the loan agreement.

Second, the loan document may have gotten lost as ownership of the underlying debt passed from one financial agency to another.

Here is the lesson I take away from the Rowe case. If you are a student-loan debtor being pursued by the U.S. Department of Education or one of  DOE's debt collectors, demand to see the documents showing you owe on the student loan.

Most times, the creditor will have the loan document, but not always.  And, as Judge Furay ruled, the burden is on the creditor to show a loan is owed.

And so I extend my hearty congratulations to Thomas Rowe, who defeated ECMC, the most ruthless student-loan debt collector in the business. Thanks to Judge Furay's decision, Mr. Rowe can tell ECMC to go suck an egg.


Posted by Richard Fossey at 7:51 AM No comments: