Don't just do something, stand there! Another flawed plan to solve the student-loan crisis

"When someone tells me he's a Christian businessman," my former law partner once observed, "I put my hand over my wallet."

I feel much the same way whenever I read some policy wonk's sweeping plan to solve the student-loan crisis. After we've listened to all the bells and whistles, we always discover that the grand scheme is just another pitch to pump more federal money to the academic racketeers and hucksters that run the nation's universities.

And this brings me to an article by Kevin Carey titled "How to Save Higher Education," published recently in Washington Monthly.  Carey proposes "a new higher education ecosystem that works for everyone, not just the chosen few."

So what would the new ecosystem look like? Carey wants to give "a direct annual subsidy of $10,000 per full-time-equivalent student" to any college (public or private) that agrees to adopt a "uniform pricing system."  Students from families with household incomes below $75,000 would pay nothing. Tuition would increase on a sliding scale, with families earning more than $250,000 paying the full tuition price of $10,000 a year.

According to Carey, his scheme would send more federal money to colleges than they are receiving now. Students from middle-class families would pay only a modest tuition price, and they wouldn't have to take out student loans.  Sounds great!

So what's the catch? Well, for starters, Carey's plan is damned expensive. Carey didn't estimate the cost of his proposal but acknowledge that it would amount to tens of billions of dollars annually.

How will we pay for it?  Carey said the cost will be "partly offset" by "eliminating the tax deductibility of any donations to colleges with an endowment greater than $200,000 per student." But who believes a modest tax hike for wealthy donors will bring in enough revenue to eliminate the student-loan program and reduce tuition prices? I certainly don't.

Interestingly, Carey assures us that his plan will have no effect whatsoever on "the system of elite colleges and universities that currently serve to acculturate and accelerate the children of the ruling class."

Even though these elite colleges, in Carey's words,  "sell status to the highest bidder through a thinly veiled system of bribes and legacy admissions preferences," we shouldn't ask them to change the way they do business. Why? Because, according to Carey, institutions like Harvard, Yale, and Stanford "truly are some of the greatest centers of research and scholarship on the planet."

In my view, Carey's plan to "save higher education"  boils down to nothing more than a proposal to send more money to our corpulent and corrupt colleges and universities.  He is content to allow the various accrediting agencies to "serve as watchdogs to prevent unscrupulous schools from lowering standards to sell easy credits."  But the accrediting bodies have done a terrible job regulating the higher education industry. Does anyone think they will suddenly change and become watchdogs over a sector that is out of control?

In my mind, the biggest flaw in Carey's college-funding scheme is its failure to address the fact that 43 million Americans owe $1.7 trillion in student loans, and about half of those debtors will never repay their loans.  And Carey says nothing about the notoriously corrupt for-profit college industry, which should be stamped out in its entirety.

But college leaders will surely love Carey's proposal.  After all, it will send them more federal money, and it will allow the nation's elite colleges to continue charging obscene prices to tutor their students in the arts of arrogance, self-righteousness, and condescension while failing to teach them how to get a job.

Posted by Richard Fossey at 2:45 PM No comments:

Email ThisBlogThis!Share to TwitterShare to FacebookShare to Pinterest
Labels: How to save higher education, Kevin Carey, student-loan crisis, Washington Monthly

Did colleges engage in a bait-and-switch scam to maximize revenues during the coronavirus pandemic?

According to a recent article in the Washington Examiner, American universities lured students back to campus this fall by deceptively promising to offer at least some in-person instruction. Then--after the students showed up and paid their tuition and fees--the colleges changed their policies and offered most or all of their classes in an online format.

In the Examiner's view:


[C]ollege administrators pulled a classic con artist's bait and switch. They asked college students to return to campus and bilked parents out of full-freight fees with the promise that at least some instruction would be in-person rather than online. Shortly before school opened, with the money safely in the bank, they shifted exclusively or at least nearly exclusively to online instruction, but asked student to come back to campus anyway.

Is this a fair indictment? I think it is.  Schools all over the United States shifted to online teaching for the fall semester, which almost everyone agrees is inferior to face-to-face instruction. Nevertheless, the schools did not discount their tuition, and they did not close their dormitories.

How can a college tell students that in-person classes are dangerous while continuing to stuff the kids into residence halls and frat houses, where the risk of contracting the coronavirus is unreasonably high?

In my view, American colleges responded to the COVID-19 crisis to maximize revenue at the expense of their students' health. It was nuts for universities to pack young adults into dorms at a time when the coronavirus pandemic is still not under control.

But the colleges were forced to adopt this reckless policy because they need the cash flow.  Many universities financed their dorm-building sprees by floating bonds or entering into partnerships with private corporations that funded the construction projects in return for getting a percentage of the room-and-board fees. These schools have got to keep their dorms full to meet their financial obligations.

Unfortunately for American higher education, the coronavirus disrupted its business model.  Parents are not going to pay fifty grand a year for their children to take online classes, and they are not going to pay room-and-board fees so their kids can live in crowded dormitories where they face an elevated risk of contracting COVID-19.

This cash-before-kids policy is not going to work for a lot of colleges. Many will close in the coming year.  And the upcoming shut-down of American schools is not just due to the coronavirus pandemic. A lot of families have figured out that that the universities are charging way too much for mediocre academic programs that don't lead to good jobs.

As James Howard Kunstler put it in a recent blog essay:

[T]he colleges and universities are [not] going down hard . . . just because Covid-19 has interrupted their business plan. Rather, because of the stupendous and gross dishonesty that higher ed has fallen into. The racketeering around college loans was bad enough but the intellectual racketeering around fake fields of study, thought-crime persecutions, and an epic sexual hysteria has disgraced the very mission of higher ed, turned it into something no better than a sick cult . . . .

I could not have said it better myself. Americans are awaking to the fact that much of our nation's higher education system is a big scam, and they are increasingly unwilling to subject their children to an education system that looks more and more like the Spanish Inquisition.


Posted by Richard Fossey at 11:30 AM No comments: 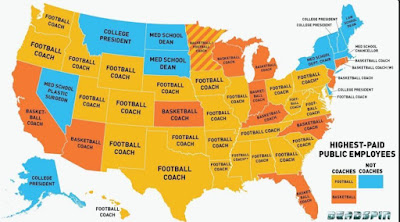 Posted by Richard Fossey at 8:25 AM No comments: