Hillary Clinton's ties to the for-profit college industry: If she becomes President, expect the status quo

The for-profit college industry has had a good run. For years, it has sucked up about a quarter of all federal student-loan money, while only enrolling about 12 percent of the nation's students.

The for-profits have reaped big profits, and why not? Some of them spend more on recruiting than they do on instruction.  Most of their revenues (nearly 90 percent for most for-profit colleges) come from the federal student-loan program, and their docile students passively sign the  loan documents that are pushed in front of them by the for-profits' efficient student processors.

And if anyone accuses them of fraud or misrepresentation--hey, no problem. Most for-profits force their students to waive their right to sue somewhere in the enrollment documents.

For years, the for-profits have greased the wheels on their gravy train by making strategic campaign contributions to important people in Congress and by hiring Washington lobbyists to protect their interests. Everyone from Mitt Romney to Florida Congresswoman Debbie Wasserman Schultz got a little money from the for-profits, and so adequately regulating this gang of pirates is out of the question.

Will things change if Hillary is elected President? It's very unlikely. Here are a few tidbits of information about Hillary and Bill Clinton's ties to the for-profit industry that come from a recent article by Michael Stratford.


David Halperin, an investigative reporter who has done a good job reporting on the for-profit industry, praised Hillary for taking a "strong, principled stand against predatory for-profit college companies," but I am highly skeptical. 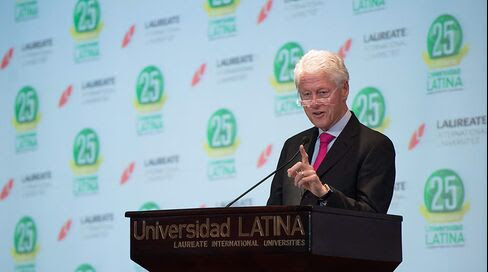