For-profit college owner pleads guilty to "pay to stay" scheme, but perhaps he's not the only offender

Hee Sun Shim, who owns three for-profit colleges in Los Angeles's Koreatown, pleaded guilty to immigration fraud in federal district court a few days ago. Shim was accused of operating a "pay-to-stay" scheme whereby foreigners obtained study visas for a fee that allowed them to reside in the United States. However, according to federal prosecutors, some of these so-called students weren't attending classes.

Obviously, helping foreigners get visas under false pretenses is reprehensible, and Mr. Shim will probably do some jail time. But a great many reputable colleges and universities are doing something similar to Mr. Shim. They are admitting foreigners to graduate programs simply to capture the revenue and keep their enrollment counts up.

And here's a story that may be an example of what I'm talking about.  My university has a doctoral program in Educational Leadership. Awhile back we received an application to our doctoral program from an African man. The application form indicated that the man had received an undergraduate degree in law from an African university and a master's degree in law from a reputable law school in the Boston area.

I recall looking at the applicant's academic transcript for his undergraduate degree from the African institution. The grades were distinctly unimpressive--a lot C and D grades. How, I wondered, had this person gotten accepted to a graduate program in law from a respectable American law school? And how had he managed to get through the demanding American curriculum?

Then I looked at the applicant's American law school transcript. He attend the law school for one year, but he had not been graded rigorously. Instead, all his course work was evaluated as either satisfactory or unsatisfactory; and all his grades were reported as "satisfactory." And after receiving a master's degree in law, this man then applied to a doctoral program at my university in a completely different field.

What is that about?

I can't say for sure, but I speculate that the law school offers a low-quality master's degree program in law that caters to foreign students who pay full tuition--almost $50,00 a year.  The program does not demand much in faculty time. These foreign students probably sit in the back of the class and patiently wait for their "satisfactory" grades and ultimately their degree.

This is not a "pay-to-stay" scheme exactly, but it is not a noble way for a university to generate revenue. I think if we looked closely we would see a lot of American graduate programs that are fighting declining enrollments by admitting foreign students with little aptitude and perhaps little interest in their studies. Many foreign students simply want to make their way to the United States, obtain an American academic credential of some kind,and perhaps find a way to obtain permanent residency.

Indeed academia's outrage about President Trump's travel restrictions might be as much about protecting their revenue streams as about concern for justice. But perhaps I am being too cynical. 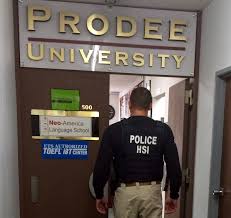 Posted by Richard Fossey at 5:31 PM