Scott-Clayton's report makes clear that the crisis in student-loan defaults among African Americans is acute. Based on the current trajectory, she projects 70 percent of black borrowers will default on their student loans by the end of 20 years.

African Americans also borrow more money than white students. For the 2004 entry cohort, black students borrowed twice as much as white students for their undergraduate education.

The Scott-Clayton report is alarming, but a 2015 Brookings report (which Scott-Clayton referenced) is even more alarming. Looney and Yannelis, authors of the 2015 report, found that 47 percent of the people in the 2009 cohort of borrowers who took out loans to attend for-profit colleges defaulted within 5 years. For the cohort as a whole, the default rate was 28 percent.

Basically, however, the Scott-Clayton report and the Looney-Yannelis report told us what we already knew.  Student borrowers who attend for-profit colleges have shocking student-loan default rates; and African American students have much higher default rates than white students.

Scott-Clayton concluded her report with some tepid suggestions, which I will quote:


[T]he results suggest that diffuse concern with rising levels of average debt is misplaced. Rather, the results provide support for robust efforts to regulate the for-profit sector, to improve degree attainment and promote income-contingent loan repayment options for all students, and to more fully address the particular challenges faced by college students of color.

Frankly, I disagree with Scott-Clayton's bland recommendations. First, of all, we should be very concerned about the rising level of student debt across all sectors of higher education--not just the for-profit sector.  Millions of student borrowers are suffering, and some of those sufferers are white graduates of Ivy League colleges.

Secondly, although it is easy to call for more "robust" regulation of the for-profits, Betsy DeVos is headed in the opposite direction. DeVos is doing all she can to prop up the corrupt for-profit college industry and to lift all regulatory constraints against the for-profit institutions.  In my view, the best way to deal with the for-profit colleges is to cut off their federal funding and shut them down.

And I stridently disagree with Scott-Clayton's blithe call to promote income-contingent repayment plans. Most of the people in those plans are not making monthly payments large enough to service accruing interest.  At the end of their 20- or 25-year repayment plans, many will owe more than they borrowed.

Moreover, although people who complete long-term repayment plans will have any remaining debt forgiven, the amount of the forgiven debt will be taxable to them.

I suspect the Brookings Institution is advancing a hidden agenda with its reports on the student-loan crisis. Brookings wants the public to focus on minority students and the for-profit colleges while ignoring the fact that debt levels are rising across all sectors of higher education and injuring millions of student borrowers--not just students of color.

Let's face facts. The for-profit colleges are not the only institutions ripping off their students. The Ivy League schools are exploiting students as well. And with each passing day, the crisis gets worser and worser. 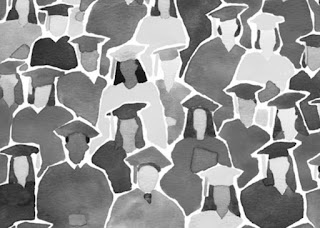 Adam Looney and Constantine Yannelis. A crisis in student loans? How changes in the characteristics of borrowers and the institutions they attended contribute to rising loan defaults. Brookings Papers on Economic Activity, 2015.