They also found that IDRPs create a "moral hazard" because monthly loan payments under these plans are not coupled to the amount of money students borrow. "As IDR plans become more generous," the authors wrote, "students have less incentive to limit their borrowing and less incentive to seek high-paying jobs because upon leaving school their monthly loan payments depend only on discretionary income, not loan amounts." And, as students become more willing to borrow, colleges and universities "face lower incentives to curb tuition increases."

Put another way, if borrowers know their loan payments will stay the same regardless of whether they borrow $50,000 or $100,000, then why not borrow $100,000? And from a university's perspective, if students are willing to borrow enormous amounts of money to pursue their studies, then why not jack up tuition rates?

The researchers also pointed out that a lot of IDRP participants are making payments so low that their loan balances are growing due to accrued interest. In other words, their loans are negatively amortizing. Thus at the end of a 20- or 25-year IDRP, many borrowers will owe more than they borrowed.  People who complete IDRPs will see their remaining loan balances forgiven, but the forgiven amount is considered taxable income by the IRS.

Income-driven repayment plans were touted by the Obama administration as a good way for student borrowers to manage growing levels of debt. But the article in Educational Researcher adds to a growing body of evidence pointing to this stark reality: millions of people in IDRPs have student-debt loads they will never pay off.

So why did the U.S. Department of Education expand its income-driven repayment options? After all, even a child could foresee the moral hazard built into these programs.  These plans are being peddled for one reason and one reason only: They help obscure the fact that millions of Americans--probably 20 million--are not paying off their student loans. 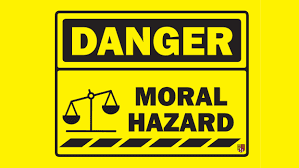 Posted by Richard Fossey at 3:31 PM