Our Lady of Sorrows looks worried: Reflections in a historic New Mexico plaza

If  Madalyn Murray O'Hair were alive today, she would turn over in her grave.

O'Hair spent her whole life trying to stamp religion out of public life. Now she is dead, and a statue of Our Lady of Sorrows stands confidently in the town plaza of Las Vegas, New Mexico.

As all good Catholics know, our Lady of Sorrows bears seven sad burdens, including Christ's crucifixion. Some statues have seven daggers circling her heart, but the statue in  Las Vegas has but one dagger, which represents all seven sorrows.  It is an impressive statue--12 feet high, and Our Lady looks totally at home in the Las Vegas town plaza.

I have viewed this particular Marian image many times on my journeys through the Sangre de Cristo Mountains to my family's cabin near Taos. On my last visit, I examined her again, and it appeared to me that Our Lady of Sorrows looked worried.  Of course, she is always sorrowful about the seven tragic episodes of her life, but I thought I detected new distress.

Well, she has a lot to be worried about, and I worry with her. Americans are killing themselves at a shocking rate. Suicides are up, death rates are rising among working-class white people, and 71,000 Americans died from drug overdoses last year--more people than were killed during the entire Vietnam War, which lasted 11 years.

Perhaps Our Lady is also worried about the disintegration of our universities, which have turned into lunatic asylums. Nihilistic professors spout racist bigotry and give all their students an "A" grade because, they say, the grading system promotes white supremacy.  Students borrow money to pay for this drivel, which they can't pay back--setting themselves up for a lifetime of penury.

Many of our judges no longer dispense justice but decide cases based solely on their political affiliations. Judge Emmet Sullivan refuses to throw out a criminal case against General Michael Flynn, even though the Justice Department admits he was framed and asked for the case against him to be dismissed.

Our newspapers, which once understood the difference between an editorial and a news story, have adopted the journalistic ethics of Joseph Goebbels, who just made up the news from day to day to fit the Nazi narrative.

Yes, Our Lady of Sorrows has a lot to be worried about.  And perhaps, like me, she worries most about our grandchildren.

I grew up in an optimistic world. People believed their future would be better than their past. My grandchildren will live in a world of growing divisions around class and race, growing disparities in wealth and opportunity, growing bitterness and conflict. My grandchildren's lives will be harder than mine was because my generation strangled the American dream--strangled it through greed, sloth,  mendacity, and viciousness.

One day, our grandchildren will curse us. Maybe Our Lady of Sorrows will curse us too. Perhaps she will shake off her mantilla of sadness and wrap herself in the tilma of wrath. That's what we deserve. 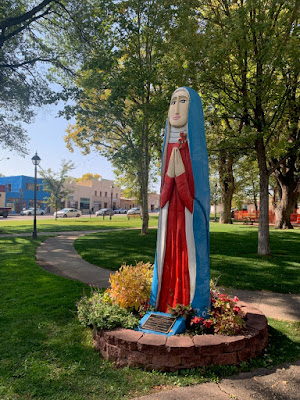 Posted by Richard Fossey at 9:49 AM