Joe Biden wants Congress to give all student borrowers $10,000 in debt relief: Too little? Too much?

This week, Joe Biden called on Congress to give all student borrowers $10,000 in debt relief on their federal student loans.  "It should be done immediately," Biden said.

Senators Elizabeth Warren and Charles Schumer say Mr. Biden's plan is not bold enough. They want him to use his executive powers to give all student borrowers $50,000 in debt relief.  Senator Schumer said that relief of that magnitude would wipe out all federal student-loan debt for 75 percent of college borrowers and provide at least partial relief for 95 percent.

So--is Biden's proposal too little or too much?

As I have said for years, a flawed relief plan is better than no relief plan. I support any congressional or presidential action that would grant some relief to the nation's 45 million student-loan debtors, who collectively owe $1.7 trillion in college loans. If $10,000 in debt relief is the only arrow in Mr. Biden's quiver, I say he should let it fly.

But both the Biden plan and the Warren-Schumer proposal are flawed. First of all, a $10,000 write-off of each individual's student debt will do almost nothing for the nearly 9 million borrowers in income-based repayment plans. Their debt grows larger by the day because the loan payments aren't large enough to pay off the accruing interest.

Moreover, Mr. Biden wants Congress to approve the deal, which will take weeks, if not months.  After all, the student-loan catastrophe is a political hot potato that Congress might not want to pick up.

The Warren-Schumer proposal is far more comprehensive than Biden's. As Senator Schumer said, this would eliminate all (federal) student-loan debt for most Americans. But Warren and Schumer want Biden to take this action on his own hook.  Does he have the authority to forgiveness $50,000 in student loans for millions of debtors?

Who knows?  Ultimately, a federal court would have to rule on that question.

As Senator Schumer averred, a $50,000 Christmas present would relieve most recent college graduates of all their federal student-loan obligations. For those folks, their college degree would turn out to be free--or almost free. That would make many young Americans very happy, and most of those who bothered to vote cast their ballots for Joe Biden.

But there are moral hazards to the Warren-Biden scheme that are not inconsequential.  I think it is a mistake to allow college graduates to walk away from their student loans while doing nothing to force the universities to bring their costs down.

Giving a few million Americans a get-out-of-jail-free card on their student loans will only encourage the universities to continue charging too much for a college degree and perhaps even tempt them to raise prices further. What do tuition costs matter if the government is going to step in from time to time and give students a free ride on their loans?

And once the feds step in once with a $50,000 bailout, students will get it into their heads that they will do it again. So why worry about those student loans? How will kids pay the rent on their luxury student housing?

No. It would be much better for Congress to pass legislation--with the next President's support--that would give distressed debtors easier access to the bankruptcy courts. Let the bankruptcy judges sort out who is really broke and deserves debt relief.

Regardless of what Congress or the next president does, the student-loan scandal will not be fixed overnight.  It is the huge friggin' elephant in the room that has blighted millions of Americans' lives.

But I think it would be a mistake for our national leaders to wipe out perhaps a trillion dollars of student debt and leave the taxpayers stuck with the bill.

Americans have grown skeptical about the value of a college experience at universities mired in sexual-assault scandals (Penn State, UCLA, Baylor, Michigan State, LSU, etc.). They wonder why our elite schools harbor so many blowhard professors who teach students nothing more than most of them are victims of societal bigotry.

If not--if America is in the toilet and worthy of nothing but contempt, why must students spend four or five years in college and borrow $50,000 or $60,000 to get a bachelor's degree in cynicism? Didn't they learn to be cynics in high school? 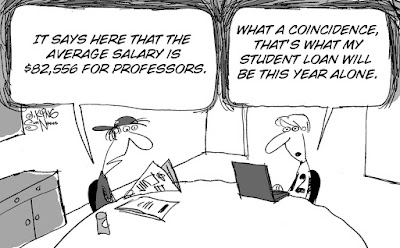 Posted by Richard Fossey at 6:33 AM