Do you want to attend a university that has a "Boil Water Advisory" link on its website?

Hurricane Ida slammed into New Orleans on August 30th--the sixteenth anniversary of Hurricane Katrina. Most of the city is without power, and the Big Easy's colleges and universities were forced to close.

According to Inside Higher Education, New Orleans's Dillard University won't resume classes until September 13, when all courses will be taught virtually. Xavier University of New Orleans moved its students to Dallas and will resume classes remotely on September 7. Tulane canceled classes through September 12, and instruction will be virtual until after the conclusion of fall break.

Meanwhile, the city of New Orleans is in big trouble. Not only did the town lose power, but water and sewage services were also compromised.  The mayor has imposed a curfew to discourage looting. College students may want to get out of town, but there is a gasoline shortage.

Obviously, New Orleans universities are doing what they have to do in the wake of a catastrophic hurricane.  No one can blame them for canceling classes and for switching to online instruction when they reopen.

But think about Hurricane Ida from the perspective of a New Orleans college student.  The cost of attending Tulane University (including room, board, and fees) is almost $75,000 per year. Students won't want to lay out that kind of bread to take online classes.

Hurricane Ida is a reminder that students need to think about their safety and security in the cities where their universities are located. New Orleans can be dangerous during hurricane season, and NOLA has experienced recurring problems with its water supply.

In fact, Tulane has a "Boil Water Advisory" posted on its website--not for Ida but for any municipal water advisory. Tulane advises students not to drink tap water, and not make ice or brush their teeth with it during a Boil Water Advisory.

If you are trying to decide where to go to college, do you really want to pay $75,000 a year to live in a city where you may not be able to brush your teeth with tap water?

And New Orleans is not the only city having to deal with environmental crises. Lake Tahoe Community College pushed back the start date for its fall semester classes due to wildfires in the area.

Some experts believe climate warming is responsible for wildfires in the West and increasingly ferocious hurricanes on the Gulf Coast. I think they may be right.

So, young people deciding where to go to college need to consider more than the reputation of the university's football team or its ranking as a party school. They need to think about wildfires and hurricanes. 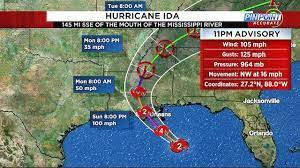 Posted by Richard Fossey at 9:56 AM