Who the hell is Maximus--the new giant student-loan servicer?

On October 20 of last year, the Department of Education announced that Navient, a giant student-loan servicer, was turning its business over to Maximus, a government services company.

DOE spokesperson Richard Cordray said this about the switchover:

We are confident this decision is in the best interest of the approximately 5.6 million federal student loan borrowers who will be serviced by Maximus and will provide the stability and high-quality service they deserve.

So, who the hell is Maximus? To start with, it is a publicly-traded company whose shares are worth about $77.  Bruce Caswell, Maximus's CEO, is well compensated; he made more than $6 million last year.

Maximus has 35,000 employees, including the drudges who chase down student-loan defaulters. How much do the low-end employees make? The new minimum wage for federal contractors was recently raised to $15 an hour. Last year, Maximus's hourly wage for low-end workers was around 13 bucks.

Forty-five million Americans have outstanding student loans, and Maximus will be servicing 5.6 million of them. For those lucky millions, Maximus will be collecting student-loan payments and keeping track of delinquent debtors and defaulters.  Maximus will also replace Navient as the agent that will help student-loan borrowers switch repayment plans and certify eligibility for loan-forgiveness programs.

Navient repeatedly and deliberately put profits ahead of its borrowers – it engaged in deceptive and abusive practices, targeted students who it knew would struggle to pay loans back, and placed an unfair burden on people trying to improve their lives through education.

Will Maximus do a better job servicing student loans than Navient? Maybe, but probably not.

However, of one thing you can be sure. Navient's stockholders will do alright. And who are those stockholders?

They include institutional investors like BlackRock and giant banks such as Wells Fargo and Bank of America.

And--ponder this: At least 17 public-employee retirement funds own shares in Maximus, including funds for California, Louisiana, New York, Oregon, and Wisconsin.

So if you are one of those 5.6 million Americans whose student loans are being serviced by Maximus and you are being ground down by your debt, you can take comfort in the fact that a lot of massive institutions--both public and private--are doing just fine. 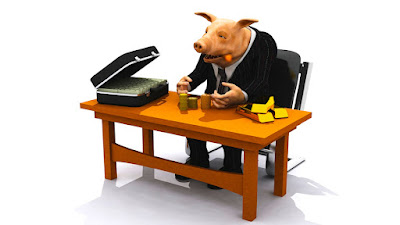 Posted by Richard Fossey at 3:04 PM