Last August, President Biden announced his plan to forgive between $10,000 and $20,000 in student debt to individuals who make less than $125,000 a year. He also extended the pause on making student loan payments until at least midsummer.

Turns out, a lot of folks objected. The NAACP didn't think Biden's plan was generous enough, calling it "a slap in the face." Senate Minority Leader Mitch McConnell called the plan "wildly unfair" because it forces taxpayers to subsidize a government program that mainly benefits high-income individuals.

Several state governments are also unhappy. A group of states sued the Biden Administration (Nebraska v. Biden), seeking a court ruling that the President's loan forgiveness program is illegal. The Eighth Circuit stopped Biden from implementing his plan pending a judicial ruling on its legality.  The Supreme  Court is reviewing the controversy and is expected to give a final decision on Biden's giveaway by the end of June.

A few days ago, the Federal Reserve Bank of New York weighed in with a highly technical report buttressed by multiple charts, graphs, and mathematical formulae. Here's what the New York Fed concluded about Biden's debt-forgiveness plan:

The plan will cost $441 billion and grant debt relief to 38 million eligible college borrowers. In the Fed's view, Biden's proposal is progressive. In other words, it does not disproportionately benefit rich people. The Fed also estimates that almost fifteen million borrowers with low loan balances will see their student debt wholly erased.

Here's my take on President Biden's student-loan forgiveness plan and the litigation it triggered.

First, I support modest debt relief for some student debtors. Many college borrowers with low loan balances are college dropouts who took a few courses but never got a degree.  Given all the helicopter money the government dumped on the business community during the COVID crisis, forgiving $10,000 or $20,000 in student debt seems reasonable.

However, if Biden's proposal is such a good idea, why didn't Congress initiate the plan through legislation? It's Congress's job--not President Biden's--to preside over what the Fed called "the largest mass discharge of consumer debt in modern history."  I think the Supreme  Court will likely strike down Biden's loan-forgiveness scheme when it rules on Nebraska v. Biden later this year.

Finally, as the Federal Reserve Bank pointed out in its report, loan forgiveness will not solve the growing crisis in college affordability.

This one-time forgiveness event [the Fed report stated]does not directly address the rising cost of post-secondary education that led to ever-exploding balances in the first place. In fact, if borrowers expect future debt cancellation events, they may borrow even more if there is some chance it will be forgiven in the future.

Let's face it. A college education costs too damn much. It's nuts to ask students to pay $50,000 a year in tuition to get a college degree in liberal arts or the social sciences.

Unfortunately, our nation's politicians and policymakers aren't even asking universities to reign in their costs, and college leaders inexorably raise their tuition rates year after year.

We will never get the student loan crisis under control until we get college costs under control. But the federal government is not doing that. Instead, it subsidizes the increasingly dysfunctional and irrelevant college industry and forces college students to pay the bill. 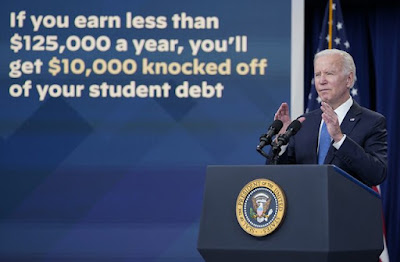