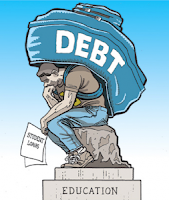 points out that the U.S. Department of Education only measures default rates over the first three years of the loan-repayment period and does not break down data by various sub-populations.

I have a couple of comments about the Education Sector report. First, it is very late in the day to call attention to the fact that DOE's reports on student-loan defaults are woefully inadequate.  I called attention to that problem more than 15 years ago in an edited book on student loans.  Nevertheless, I am glad Mr. Gillen highlighted this problem again.

Second, Mr. Gillen's report, although useful and professionally prepared, understates the deficiencies in DOE reports on student loan defaults. In my opinion, DOE's reports are so inadequate as to border on fraudulent misrepresentation.

As The Education Sector report explains:

Second, and more importantly, DOE's default rate does not include people who received economic hardship deferments during the measurement period--people who are exempted from making their loan payments due to dire economic circumstances like unemployment. We know some for-profit institutions encourage their students to obtain economic hardship deferments as a way of keeping institutional default rates down.

And that is no small matter. I have written about the Hedlund bankruptcy case, in which a man received a series of economic hardship deferments on his student loans over a period of many years and was never in default. About 20 years after taking out his loans, he filed for bankruptcy.  Although he had been excused from making payments by his economic hardship deferments, his loan size had nearly doubled due the fact that  interest had accrued over the years.

The Hedlund case  is an indication that there may be a lot of people who are on long-term economic hardship deferments who are not making loan payments and whose total indebtedness is growing.  Without knowing that number, we really can't say what the true student-loan default rate is.

In my opinion, people who have economic hardship deferments that last more than three years and people in IBR plans whose loan payments are so small that their debt is actually growing are in default.  Not technically, of course--but the reality is that many of these people--probably most of them--will never pay back their student loans.

That Tired Old Metaphor: Rearranging the Deck Chairs on the Titanic

I've used this tired old metaphor before, but forgive me for repeating it. Education policy makers are not dealing with the enormity of the student loan crisis; they are rearraning the deck chairs on the Titanic.

Not long ago, the Bill and Melinda Gates Foundation awarded grants to 16 higher education policy groups, which were charged with making recommendations for improving the student-loan program.  Entitled Reimagining Aid Design and Deliver (RADD), the project elicited 16 reports and a wide variety of recommendations. I did not read all 16 reports word for word, but I did read the executive summaries. I don't think any of the 16 reports mentioned the fact that DOE's student-loan default rate masks the reality of how many former students have defaulted on their loans.


In my opinion, most of the higher education advocacy groups, think tanks and professional organizations--organizations like the American Council on Education, the National Association of Student Financial Aid Administrators, and the Association of Public and Land-Grant Universities---are pretending that the status quo for the federal student loan program  is both acceptable and sustainable--we just need to tweak it a bit.


Friends, the status quo of the student loan program is not acceptable and it's not sustainable.  Student loan indebtedness totals $1 trillion; and it grows bigger every day. It's time to face the fact that this well-meaning program has ruined the lives of millions of college borrowers and that a big percentage of this trillion dollar debt is never going to be paid back.

Andrew Gillen. In Debt and In the Dark: It's Time for Better Information on Student Loan Defaults. Education Sector, July 2013. Accessible at: http://www.educationsector.org/publications/debt-and-dark-it%E2%80%99s-time-better-information-student-loan-defaults

Posted by Richard Fossey at 2:44 PM No comments: