For what cause would I send my own children or grandchildren to die overseas? Genocide in Iraq

As my small band of readers know, I have two blogs: a blog on Catholicism and culture and a blog on the federal student loan program. Occasionally, I comment on foreign affairs at both blog sites. Why do I do that?

President Obama and almost all his cronies were educated at places like Harvard Yale, Brown, Dartmouth, Georgetown, etc., where they evidently learned no problem-solving skills or even the capacity to make foreign policy decisions based on our long-term national interests or fundamental principles of morality.

And you see where we are now: huge messes in Ukraine, Afghanistan, Syria, Libya, sub-Saharan Africa, and Iraq. So I have commented from time to time that the global mess we are in has its roots in our elitist, arrogant universities.

As for my blog on Catholic culture, I comment on international affairs because my Catholic faith compels me to take stands on international affairs if moral principles are at stake. Servant of God Dorothy Day was a pacifist; she even opposed American involvement in World War II. I am not a pacifist; but I believe we should not send Americans to die or be maimed in order to defend unjust national interests.

Now to the subject of this blog. Ever since the United States abolished the draft, it has excused everyone from joining the military who choose not to do so. Since that time, it has been mostly young men and women from working-class and impoverished families who went to war. Barack Obama's children will never put on a uniform, and neither will the children of most of the people who serve in his administration or in Congress. I can almost guarantee you that no hedge fund manager or corporate CEO has a child who served in a combat role in Iraq or Afghanistan.

And--to be fair, I would not willingly see my own children or grandchildren fight in Afghanistan or Iraq. I am grateful that none of my family members have had to go to either place.

So for what cause would I send my own children or grandchildren to die overseas in a foreign war? To fight Hitler, obviously. That would have been an easy decision for me. But I would not have supported the firebombing of a civilian population as the U.S. and Britain did in Germany. Nor would I have supported the bombing of Hiroshima or Nagasaki--even though my own father was in a Japanese prison camp when those bombs were dropped and the dropping of those bombs may have saved his life. 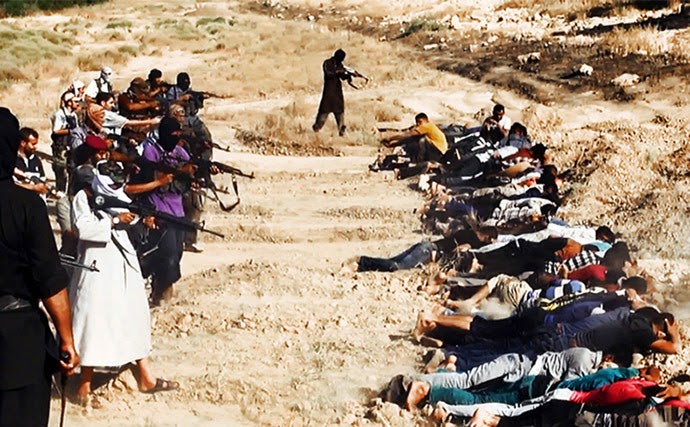 So here is my position. I believe the United States should calibrate its policy of military intervention around basic human rights and the rights of religious minorities and virtually nothing else. In the Middle East right now it is almost impossible to tell the good guys from the bad guys. Is the Assad regime in Syria morally superior to the forces that oppose it? Who knows? Is the military regime that runs Egypt better than the Morsi government that the military overthrew? Again, who knows?

So I propose that the United States should take this stand: We will not go to war against any government that protects basic human rights and respects the rights of religious minorities. Thus if the Assad regime protects Christians in Syria, we would support it over ISIS. If the Military junta respects Egyptian Christians, then we would support it over the Islamic Brotherhood. And we would intervene to help nations facing outrageous atrocities against innocent civilians like the genocide in Rwanda and the kidnapping of more than 200 school girls in Nigeria by Muslim extremists.

Right now, ISIS is overrunning parts of Iraq and threatening Kurdistan. ISIS terrorists are committing genocide against religious minorities in the region--including Christians.

The Christians of the Middle East (and increasingly in sub-Saharan Africa) need American military help. With apologies to Dorothy Day, I think we should give it to them. Surely, if there is any emergency important enough to send a hedge fund manager's son to die in the Middle East it is the current crisis in Iraq. God help me--this emergency might even justify sacrifices from my own family.
Posted by Richard Fossey at 11:49 AM No comments: