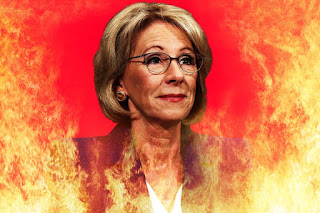 Posted by Richard Fossey at 3:36 PM No comments:

The for-profit college industry is shrinking: It's time to shut this sleazy sector down

We've known for a long time that the for-profit college industry is a cancer infecting the higher education community. Senator Tom Harkin's committee report, published in 2012, told us that.

The cost of attending a for-profit college is far higher than the cost of enrolling at a public college. Completion rates are low, job prospects for attendees are often bleak. Some for-profits spend more on recruiting than they do on instruction.

And student-loan default rates at the for-profits are quite high. Forty-seven percent of the 2009 cohort of for-profit college borrowers defaulted on their loans within five years.

Here are the 5-year cohort default rates for selected for-profit colleges, as reported by a 2015 Brookings Institute paper:

And of course these figures understate the number of for-profit college students who are not repaying their loans because many non-defaulters have their loans in deferment or forbearance and are not making their monthly loan payments.

But the good news is this: the for-profit college industry is shrinking. When the Harkin report came out five years ago, for-profit colleges enrolled 13 percent of all college and university students. In the spring semester of 2017, that figure had dropped to 5 percent. For the industry as a whole, for-profit enrollments dropped 10 percent between spring 2016 and spring 2017.

Part of this drop can be attributed to aggressive enforcement of consumer protection laws by state attorneys general and better regulation by the U.S. Department of Education. In the last two years alone, Corinthian Colleges and ITT Tech closed and went bankrupt. Together these institutions had a half million former students.

Moreover,  potential students are becoming more wary of aggressive for-profit college recruiters. This may explain why enrollments are plummeting at several well-established for-profit colleges, such as University of Phoenix and DeVry.

Now, while the for-profit college sector is shrinking, is the time to shut this sleazy industry down. I think the for-profits are hoping the Trump administration will be friendly to their interests, allowing them to get back on their feet.

But let's  hope the industry is wrong. If President Trump implements policies that reinvigorate the for-profit college industry, it will be the biggest mistake of his administration--far bigger than his goofy dinner conversation with FBI Director James Comey.

Paul Fain. Enrollments Continue to Slide at For-Profits and Community Colleges. Inside Higher Ed, May 24, 2017.

UC Davis Chancellor Linda Katehi accepted compensation from a textbook publisher: She should be fired

Linda Katehi, Chancellor of UC Davis, received $70,000 for serving on the corporate Board of DeVry Education Group, the owner of a for-profit college being scrutinized by the U.S. Federal Trade Commission. In addition, her DeVry position entitled to her to $100,000 in stock, according to the Sacramento Bee.  Not bad for part-time work.

Since then, the public has learned that Katehi received $420,000 in income and stock for serving on the board of John Wiley & Sons, a textbook publisher.  All of this is in addition to her Chancellor's salary of more than $400,000 a year.

What an outrage! And what is Chancellor Katehi's response to the uproar? She resigned from both her DeVry position and her Wiley position, and she promises to donate her Wiley stock to a student scholarship fund.

And then of course Katehi released the standard mea culpa press release in which she said this:


I take my responsibilities as Chancellor of UC Davis, and the entire University of California, very seriously and sincerely regret having accepted service on boards that create appearances of conflict with my deep commitment to serve UC Davis and its students.

Note that she admits to accepting service on corporate boards--not that she accepted money.  And she expresses regret, which is far different from apologizing. And she acknowledges the appearance of a conflict--not an actual one. Yeah, I'd say a university president who takes four hundred grand from a textbook publisher has an appearance of conflict.

This lady needs to be fired. In fact, she should have been fired after the UC Davis pepper spray incident of 2011, when university police officers pepper sprayed a group of seated and nonthreatening student protesters. Katehi said she didn't know police were going to use pepper spray on the students, which is something of an excuse, I suppose.

But UC Davis police officers were sued  for firing pepperballs at student bystanders at an outdoor drinking bash that took place in 2004. One victim lost the use of an eye. The Ninth Circuit ultimately ruled that the police had used an unconstitutional level of force against the students.

So if there is anything this overcompensated clown should have gotten right while serving as UC Davis's chancellor it was control of the campus police. Yet an independent report found that UC Davis police were not authorized to use the specific type of pepper spray that they inflicted on students in the 2011 incident and were not trained to use it correctly.

Incredibly, Katehi's venality is not exceptional. According to a fine article  written by Diana Lambert and Alexei Koseff for the Sacramento Bee, nine UC chancellors accepted $1.5 million in cash compensation from outside corporations during the  years 2012-2014--and that doesn't include stock options or deferred  compensation!

What does UC President Janet Napolitano have to say about Katehi's behavior? "I deeply value Linda's strong record in helping to make UC Davis a world-class center of scholarship and research, and continue to believe in  the value of her contributions to the University."  Blah, blah, blah.

What Napolitano is really saying is this: The University of California protects its insiders.

It is a pity that UC chancellors are not treated like UC students. If there were any justice in the world, all nine moonlighting UC chancellors would be put before a hand-picked squad of untrained UC Davis police officers and assaulted with pepper spray.