In May 2013, Bakersfield College was penalized and sanctioned for violating the Athletic Foundation’s bylaws because “the College had provided football players with meals and access to work and housing opportunities not available to others students.” The College appealed this decision through the appellate process outlined in the Athletic Association’s constitution, but it declined to submit to binding arbitration. Instead, Bakersfield filed suit against the Athletic Association and the Football Association for breach of contract and breach of the fair procedure doctrine

The two Associations argued that Bakersfield had failed to exhaust its administrative remedies by foregoing the binding arbitration process. Bakersfield responded by arguing that it should be excused from participating in binding arbitration because the arbitration provision was unconscionable under California law.  A California trial court sided with the two defendant Associations and ruled that Bakersfield’s lawsuit was barred because the college had not exhausted its administrative remedies.

On appeal, the California Court of Appeal (Third District) reversed the trial court’s decision. In the appellate court’s view, the challenged arbitration agreement was unconscionable under California law and could not be enforced.

In the case before it, the court continued, “the College had no ability to individually negotiate the terms of the contract at the time it was made. It could not opt-out of the arbitration provision as drafted by the Athletic Association. The uncontroverted evidence supports a finding of procedural unconscionability.” As the court pointed out, Bakersfield had to accept the Athletic Association’s terms if it wanted to participate in intercollegiate athletics, a matter of considerable importance to the college and its students.  “To provide this opportunity to its students, the College had no other alternative -- it had to be a member of the Athletic Association.”

The court went on to consider whether the arbitration provision was substantially unconscionable.  In making this assessment, the court stated, the paramount consideration is mutuality. “An arbitration agreement requires a ‘modicum of bilaterality,’ meaning the drafter cannot require another to submit to arbitration to pursue a claim but not accept the same limitation when it would act as the plaintiff, without some reasonable justification for such one-sidedness based on business realities.”

In assessing the Athletic Association’s arbitration provision, the California appellate court found no mutuality. “The binding arbitration procedure applies only to appeals by member colleges of penalty and sanctions decisions. It is not an alternative dispute procedure applied evenhandedly to all disputes between the parties.” In particular, the provision did not require the Athletic Association to submit its disputes with member colleges to binding arbitration, and thus the provision lacked mutuality.

The court was also troubled by the manner in which arbitration panel members were selected. Although colleges could nominate panel members, “in practice, the entire master list was solicited, and appointed, solely by the [Athletic Association’s] Executive Director, with no input from member colleges.” In fact, the court noted, “the Athletic Association unilaterally selected all individuals on the master arbitration panel list and did so in secrecy, precluding the colleges from commenting on or objecting to any potentially biased panel member.” Such a procedure, the court state, “does not achieve the minimum levels of integrity required to enforce an agreement to arbitrate.”

The court’s decision in the Bakersfield College case has important implications for students who attend for-profit colleges. These colleges typically force students to sign mandatory arbitration agreements as a condition of enrollment. A student has no power to negotiate with a for-profit college regarding arbitration provisions—which are offered on a “take it or leave it” basis. Based on the reasoning in the Bakersfield College case, such arbitration agreements are procedurally unconscionable.

Likewise, the terms of a for-profit college’s arbitration agreement may disadvantage students who wish to resolve complaints against their college. For example, in Magno v. College Network, Inc., an arbitration provision forced California students to arbitrate their disputes with a for-profit education provider in Indiana.  Such language, a California court ruled, disadvantaged students in a way that made the arbitration agreement substantively unconscionable and unenforceable.

Note: A longer version of this article has been published in School Law Reporter, a publication of the Education Law Association.

Posted by Richard Fossey at 8:49 AM No comments:

Dicent v. Kaplan University: An unhappy student sues a for-profit university, but the Third Circuit forces her to arbitrate her claims

Maria Dicent enrolled in an online legal studies program at Kaplan University in 2014. She did not have a good experience. In 2017, she sued Kaplan in a federal court, accusing the for-profit university of making false claims and disseminating false advertisements.

According to Ms. Dicent, Kaplan lured her into enrolling in Kaplan's online program by using deceptive tactics. She said she had not been informed that she would need 180 hours to graduate, far more hours than a typical four-year degree program requires and that she had not been able to keep her eBooks, which she apparently paid to use. She also said Kaplan's financial aid office retaliated against her because she refused to allow her photo to be used to promote Kaplan.

Unfortunately for Ms. Dicent. she signed an arbitration agreement when she enrolled at Kaplan back in 2014. In that agreement, Dicent promised not to sue Kaplan and to arbitrate any claims she might have against the for-profit. She also agreed to waive her right to a jury trial.

Based on the arbitration agreement, a federal trial court threw out Dicent's suit and ordered her to arbitrate her clam. Dicent, who pursued her case without a lawyer, then appealed to the Third Circuit Court of Appeals, which sided with the trial court.

Dicent argued on appeal that she was not aware of the arbitration agreement, but the Third Circuit did not buy her argument. A clearly labeled Arbitration Agreement was included in Dicent's enrollment packet, the court noted; and Dicent admitted having signed the packet with an e-signature.

Dicent v. Kaplan University is an unfortunate decision. The Obama administration recognized that for-profit colleges were using arbitration agreements to prevent students from suing them for fraud or other misconduct. Obama's Department of Education adopted a regulation forbidding the for-profits from forcing their students to sign arbitration agreements.

Betsy DeVos, President Trump's Secretary of Education, scuttled the Obama ruled shortly after taking office, but a federal court ordered her to implement it. In light of that ruling, Secretary DeVos released new guidance to the for-profit colleges, instructing them to drop enforcement of mandatory arbitration agreements.

In recent years, a few courts have invalidated arbitration agreements on various grounds. Some courts have labeled them adhesion contracts--agreements which a stronger party forces a weaker party to sign on unfavorable terms. Other courts have looked at the inherent unfairness in some of these agreements. For example, a California court refused to enforce an arbitration agreement that required California students to arbitrate their disputes against a medical-training school in Indiana.

Poor Ms. Dicent. Acting without an attorney, she was probably unaware of the legal arguments that can be made against arbitration agreements that for-profit colleges require students to sign as a condition of enrollment. She may not have known that the Obama administration recognized these agreements for what they are--a shyster tactic to protect for-profit colleges from being sued for fraud.

I feel quite certain that Ms. Dicent was telling the truth when she said she did not know about the mandatory arbitration agreement until Kaplan submitted it in district court. Almost all students sign long, turgid documents as a condition of enrollment, and most of them sign without reading. What would be the point? When students enroll at a for-profit college, they are enrolling on the college's terms, and they realize they have no power to negotiate.

What is so bad about arbitration agreements? First of all, the complaining party is usually required to pay half the arbitrator's fees, so arbitration may be more expensive for the student than a lawsuit. Second, arbitration agreements often bar students from banding together to file class actions suits, which is virtually the only way students can obtain justice against the well-funded for-profits with their battalions of lawyers.

Finally, it is well known that arbitration generally favors the corporate party. That is why banks, financial-services institutions, and for-profit colleges force their customers to sign them. The arbitrators know they will see a defrauded student only once, but they will see the corporate party again and again. If they get a reputation for siding with the underdog, the corporations won't choose them to arbitrate their disputes.

The for-profits know they will repeatedly be accused of defrauding their students. The best way to deal with this constant threat is to get the students to promise not to sue before allowing them to enroll. Then when students get defrauded--as many of them will--there will be damn little they can do about it. 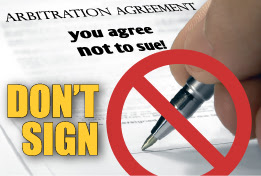 Posted by Richard Fossey at 8:34 AM 6 comments: