Lady Bird, Greta Gerwig's  new coming-of-age movie, has been nominated for five Academy Awards, including Best Picture. But it is an insidious movie, which delivers a treacherous message that self-fulfillment can be found at an elite East Coast college.

Christine, who calls herself Lady Bird, is a discontented California girl who attends a Catholic high school in Sacramento. Her mother doesn't understand her, the guy she is sweet on is gay, and she cheats on her exams.

To make matters worse, Lady Bird's parents live in a tiny ranch-style home, with only one bathroom. She self-deprecatingly tells her boyfriend she lives on the wrong side of the tracks, an insult he guilelessly passes on to her mom and dad.

Sacramento bores Lady Bird, which she dismisses as "the Midwest of California." She longs to escape California to go to college on the East Coast.   Although several elite schools reject her, she finally get accepted to a fancy college in New York.

But the school is expensive. Her father, who comes across as a genuinely nice guy, recently lost his job; and at his age, he is unlikely to get another one. Lady Bird's mother, a nurse, works double shifts at a hospital to make ends meet.

But Lady Bird simply must go east to college, so her dad refinances the family home to cover the cost. The movie ends with Lady Bird in New York City, where she lies to one of the first guys she meets and tells him she is from San Francisco.

What a piece of crap! Any young woman who allows her out-of-work father to refinance the family's pathetic little house so she can attend a snooty East Coast college is a self-absorbed jerk. Although the movie is pitched as a young woman's heroic quest for self-fulfillment, it's really just a gratuitous insult to flyover country, which the filmmaker expanded to include parts of California. 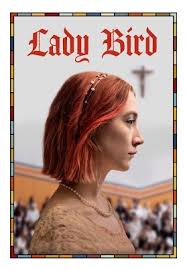