Vermont Law School is rolling out new master's degrees: But does Vermont even need a law school?

Vermont Law School, located in the bucolic village of South Royalton, has struggled recently with declining enrollment, demographic shifts, and "wobbly finances." Consequently, VLS is rolling out new law-focused master's degrees and changing its name to the Vermont Law and Graduate School.

Karen Gross, a former president of Southern Vermont College, applauded the move. "VLGS should be commended for trying to innovate, and I think what they did and silo-busting, moving programs online, and staying close to their mission, is smart," Gross was quoted as saying in an Inside Higher Ed article.

So, what's new at VLGS? In addition to the law school's traditional J.D. program and its master's degree program for J.D. graduates, VLGS now offers several master's degrees that will not qualify graduates to practice law. Specifically:

In collaboration with other universities, VLGS will also offer eleven dual degrees. For example, working with the University of Cergy-Pontoise (France), VLGS students can get a JD/LLM in French and European Law. Partnering with the University of Cambridge (England), students can obtain a JD/Master of Philosophy degree in real estate finance.
What will it cost students for these new degrees? About 50 grand a year in tuition and fees.
In short, as several commentators explained in the Inside Higher Ed article, VLGS is "diversifying its product line," it's "silo-busting,"  "moving the needle," and "going big."
I suppose VLGS should be commended for launching these new degrees, but all this activity begs the question:
Does Vermont even need a law school? After all, there are nine law schools in neighboring Massachusetts and fifteen law schools in nearby New York.
All across the country, law school applications are down. Many people who are smart enough to be good lawyers are choosing other career paths.
To combat this trend, law schools have spun out new graduate programs to attract more students. These programs are targeted toward people who are not seeking to become lawyers. Often, these master's programs put students in debt without improving their graduates' job prospects.
Moreover, the United States has too many law schools and too many lawyers. The public would be well served if the American Bar Association forced some of these schools to close and pressured the remaining schools to concentrate on their core mission--preparing people to be lawyers.
Unfortunately, that is not what the ABA is doing. And the ABA's inaction leaves schools like VLGS free to spin out new and expensive graduate degrees, which may or may not be worth what students are paying. 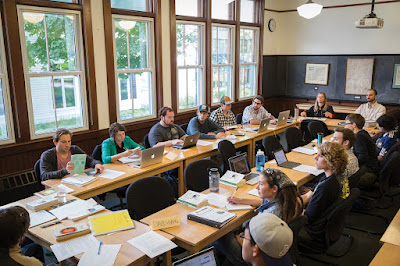 Posted by Richard Fossey at 7:53 AM No comments: