College tuition has risen faster than the rate of inflation for the past quarter-century. While wages have remained stagnant, the cost of going to college has shot through the roof. According to Forbes writer Camilo Maldonado, tuition rose 8 times faster than wage growth during the years 1989 to 2016. Eight times faster!

Why? The colleges say they are forced to raise tuition rates because the states are providing less support for higher education. But this lame explanation--repeated ad nauseam--is mostly bullshit. The colleges don't mention the explosion in administrative positions-the profusion of assistant vice presidents, executive associate deans, etc. It is not uncommon for senior administrators at public and private universities to draw salaries that exceed a quarter-million dollars a year.

In any event, everyone agrees that rising tuition costs have forced millions of American students to take out student loans, which now total $1.6 trillion. Something must be done to alleviate the distress.

Several Democratic candidates for the presidency have proposed making college education free at all public colleges and universities. You would think the higher education community would love that idea. But it doesn't. Vassar president Catharine Hill criticized Bernie Sanders's free-college idea when he ran for president in 2016. Her lame-brained solution was to expand long-term income-based repayment plans. And that's basically what we've done--creating repayment plans deliberately structured so that students can never pay off their college loans.

Now we are in the early stages of the 2020 presidential election season, and more Democratic hopefuls have joined Bernie in proposing a free college education for everyone. Senators  Elizabeth Warren, Kamala Harris, Cory Booker, and Kirsten Gillibrand (who recently dropped out of the presidential race) have all endorsed a free-college proposal.

But the higher education community still opposes the idea. Just a few days ago, Brian Rosenberg, president of Macalester College, published an op-ed essay in Chronicle of Higher Education, in which he cited a couple of liberal tropes to justify his opposition to free college.

A free college education would hurt low-income students, Rosenberg argues, because they would be "squeezed out" in the application process that would become more competitive if tuition were free. And he also contends that free college would exacerbate the nation's already low graduation rate.

Huh? How could free college be bad for low-income students? How could it make graduation rates go down?

Mr. Rosenberg is the president of Macalester College, a very good liberal-arts school in Minnesota, but he does not mention that free college at public institutions would severely disadvantage the private colleges. Who would pay $54,000 a year in tuition and fees to attend Macalester College if they could enroll at the University of Minnesota tuition-free?

I'm sure Mr. Rosenberg's arguments against free college are sincere and his commitment to private liberal-arts education is genuine. But a great many university presidents and higher-education policy wonks simply don't care about the student-loan crisis, which has motivated political leaders to propose a free college education.  They want to preserve the status quo in higher education, with the federal government spewing more than a $100 billion a year to support the present system.

How many elite-college presidents have come out in favor of a free college education? I don't think any of them have. Unlike Mr. Rosenberg, most college leaders are keeping silent about their qualms, but rest assured they will fight tooth and nail if a Democrat is elected President and tries to get a free-college plan through Congress.

Meanwhile, I don't think any of these arrogant college presidents have lifted a finger to ease the student-debt crisis.  The status quo works just fine for them.

Posted by Richard Fossey at 9:58 AM No comments:

The Trump Administration hates the Public Service Loan Forgiveness Program (PSLF). Signed into law by President George W. Bush in 2007, PSLF allows student-loan debtors who work in public-service jobs to have their student loans forgiven if they make 120 student-loan payments in a qualified repayment plan.

The first PSLF participants to have accumulated 120 student-loan payments became eligible for debt relief in 2017--10 years after the program was introduced. As has been widely reported, the Department of Education approved less than 1 percent of the applications for PSLF forgiveness that it had processed as of  September 2018.  In fact, DOE said 70 percent of the applicants were not eligible for PSLF participation.

So far, over one million student-loan borrowers have applied to DOE to have their employment certified as PSLF eligible, and millions more are counting on PSLF for debt relief but haven't applied yet. It's a mess.

And it is especially a mess for people who borrowed $100,000 or more to get a law degree or other graduate degree. According to the American Bar Association, the average debt load for people who attended a private law school is $122,000. For many of the people who accumulated six-figure student-loan debt to finance their graduate studies, PSLF is the only viable option for debt relief.

Betsy DeVos, Trump's Secretary of Education, apparently does not care that her agency has frightened or angered millions of people who are counting on PSLF to manage their student loans. According to a news report, a senior DOE official said that DOE does not support PSLF and would not implement it if it were not legally obligated to do so.

But the Democrats are "woke" about this problem. This week, Senators Tim Kaine and Kirsten Gillibrand introduced a bill to overhaul the PSLF program. Thirteen Democratic senators signed on as co-sponsors, including all the U.S. Senators running for President (Elizabeth Warren, Kamala Harris, Bernie Sanders, Amy Klobuchar and Cory Booker).

The Kaine-Gillibrand proposal defines eligible public-service organizations broadly to include all federal, state, and local government agencies and all charitable organizations that qualify  for tax-exempt status under 501(c)(3) of the tax code. As Jason Delisle pointed out in a 2016 analysis of PSLF, that definition applies to one quarter of the American workforce.

The Kaine-Gillibrand bill also specifies that all student-loan debtors qualify for PSLF, regardless of the federal loan program or repayment plan they are in. This provision also expands eligibility for PSLF participation far beyond what the DeVos DOE permits.

I support passage of the Kaine-Gillibrand bill, and I hope it is enacted by Congress. But we should not deceive ourselves about the cost of PSLF. Thousands of people seeking debt relief under PSLF owe $100,000 or more. Most of these people are making income-based monthly payments on their loans that are not large enough to cover accruing interest. Their debt load is increasing month by month as accrued interest gets capitalized and added to their loan balances. If these people's student-loan debts are forgiven after 10 years, the government will essentially be forgiving the entire amount that was borrowed plus a lot more due to the accrued interest that will also be forgiven.

Remember Josh Mitchell's story in Wall Street Journal about Mike Meru, who borrowed $400,000 to go to dental school? Dr. Meru is making payments of about $2,000 a month in an income-based repayment plan, but his debt has grown to $1 million due to accrued interest. If Meru gets a qualified public-service job and holds it for ten years, DOE will forgive the entire $1 million plus additional interest!

This is a huge problem, and the Kaine-Gillibrand bill won't solve it. Under the GRAD Plus program, graduate students can borrow the total cost of their graduate education--tuition, books, and living expenses--no matter what the cost. It is not surprising then that graduate-school tuition prices went up dramatically after the GRAD Plus program was enacted.

If the bill becomes law, the Kaine-Gillibrand proposal will give relief to millions of student-loan borrowers. But the bill is just a stop-gap measure. As I have said, the only solution to the student-loan crisis is bankruptcy relief for honest debtors who can't pay back their student loans.  More than 45 million Americans have outstanding student loans. I think most of them would vote for a presidential candidate who endorses bankruptcy relief for distressed student-loan debtors. 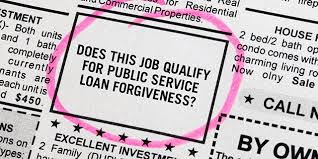 Last month, John Katko, a Republican congressman from New York, filed H.R. 770, a bill that would make student loans dischargeable in bankruptcy like any other consumer debt.

Titled the "Discharge Student Loans in Bankruptcy Act," Katko's bill is quite simple. It merely strikes the "undue hardship" clause from Section 523(a) of the Bankruptcy Code.

If H.R. 770 becomes law, millions of Americans who are overwhelmed by student loans will get relief in the bankruptcy courts. They will have an opportunity to start families and buy homes. They will get the fresh start that bankruptcy is intended to provide.

Let's make Katko's bill the litmus test for everyone who is running for president or is thinking about running. Let's ask them one simple question: Do you support Katko's bill or not?

Our federal legislators are fond of holding committee hearings where they bully witnesses by demanding yes-or-no answers to all their hectoring questions.

Well, here is a question to everyone who wants to be president, and we should demand a yes-or-no answer. Unless a presidential candidate can say "Yes, I support H.R. 770 without qualification," that person is nothing more than a windbag who doesn't care about average Americans and does not deserve our vote.

Note: I am grateful to Phil Uhrich for calling this bill to my attention.  Mr. Uhrich wrote a provocative essay on national politics in 2016 that is still timely.

Posted by Richard Fossey at 8:39 AM 3 comments: