The Department of Education's Office of Inspector General (OIG)issued another one of those mealy-mouth reports we've come to expect from the Department. In essence, the OIG told us something we already knew: DOE's income-driven repayment plans (IDRs) and debt forgiveness plans are costing taxpayers billions of dollars.

For several years now, the higher education community has touted income-driven repayment plans as the panacea for the rising  cost of going to college.  Back during the 2016 presidential campaign, Catharine Hill, president of Vassar College, wrote an op ed essay for the New York Times attacking Senator Bernie Sander's proposal to allow people to go to college for free.  Free college is not the answer, Hill argued. Rather we need to expand income-driven repayment programs.

Indeed, DOE has expanded income-driven repayment options. President Obama's administration rolled out the PAYE and REPAYE, programs that allow student borrowers to pay 10 percent of their adjusted income for 20 years in lieu of the standard 10-year repayment plan. Borrowers who make regular payments for 20 years will have their loan balances forgiven.

As outlined by OIG, the Department of Education offers six income-driven repayment plans and two loan forgiveness plans. Of course, all the student loans under these plans accrue interest. Even an idiot knows that borrowers who makes loan payments that aren't large enough to pay accruing interest will never pay off their loans.

So it shouldn't surprise anyone that DOE's flexible spending plans and loan forgiveness plans are costing the taxpayers billions of dollars because the government is loaning people more money than they will ever repay.

As the OIG reported, DOE's loan balance for income-driven repayment plans increased from $7.1 billion to $51.5 billion between 2011 and 2015. That's an increase of 625 percent in just four years.

Meanwhile, government subsidies for income-driven repayment plans ballooned from $1.4 billion to $11.5 billion over the same four years--an increase of more than 800 percent.

Why did our government create these insane flexible repayment plans?  I can think of one primary reason.

IDRs allow DOE to maintain the fiction that the vast majority of college borrowers are paying back their loans. For most of the people in these plans, an IDR is the only alternative to default. In fact, DOE has encouraged college-loan defaulters and people in danger of default to sign up for IDRs.

But most people in income-driven repayment plans are not paying off their loans because their payments aren't large enough to cover accrued interest. Thus, while IDR participants are not officially in default, they are only making token payments on loans they will never pay off.

What is the OIG's advice to DOE about how to handle the enormous cost of its income-driven repayment plans and its loan forgiveness programs? Here is OIG's gobbledygook recommendation:


We recommend that the Department enhance its communications regarding cost information related to the Federal student loan program's IDR plans and loan forgiveness plans to make it more informative to decision makers and the public.

That's right: All OIG can think of to recommend is more transparency!

As the Wall Street Journal reported about 20 months ago, 43 percent of college borrowers--approximately 9.6 million people--weren't making loan payments as of January 1, 2016. Some of these borrowers were in default, some had delinquent loans and some had loans in forbearance or deferment.

And thanks to DOE's income-driven repayment plans, an additional six million people are making payments too small to pay off their loans.

It is time for DOE to be more than transparent. It needs to admit that about half the people who took out student loans will never pay them back. Thus, of the $1.4 trillion in outstanding student loans, more than half of it will never be collected. 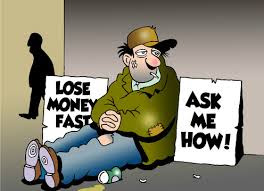