What should a university do when its employees attack peaceful students with pepper spray? Why, issue a report, of course.

The University of California gained a lot of experience dealing with student protesters during the Free Speech movement of the 1960s. One would think its institutional memory would include some protocols about how to handle peaceful student protesters. 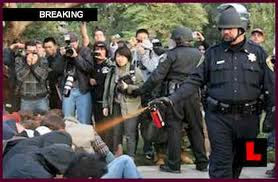 Apparently not. After campus police officers pepper sprayed peaceful students at UC Davis last November, the president of UC Davis commissioned a report, which was recently released. Prepared with the aid of a former California Supreme Court justice and a consulting firm, the report weighed in at 190 pages long.

This week, the University of California issued another report, only 150 pages long, entitled "Response to Protests on UC Campuses, put together under the leadership of UC's general counsel and a law school dean. This report found--and I know you will find this shocking--that pepper spray is harmful to people's health. Yes, it is all there in the report. Pepper spray can damage people's eyes, respiratory systems,and skin.  The report, which contains 50 recommendations, cost about $300,000 to produce.

The University of California's response to the UC Davis pepper spray incident illustrates what is wrong with American higher education. In the wake of a shocking assault, the University of California commissioned high-paid administrators, consultants and lawyers to put together two reports. As far as I know, no one who perpetrated those outrages upon UC Davis students has been punished.

Meanwhile, tuition goes up every year, and students are expected to pay their bills by taking out larger and larger student loans. No wonder students are angry.