It's All About the Money: Louisiana State University, Coached by Fried Chicken Huckster Les Miles, Whipped Sam Houston State By a Score of 56-0

Louisiana State University's varsity football program brings big money to the local Baton Rouge economy.  The liquor store not far from my home opens at 6:00 AM on days when LSU plays at home: 6:00 AM! A Baton Rouge citizen who bought his bourbon at that hour yesterday had a solid 12 hours to drink before kickoff at 6:30 in the evening.  So the liquor business makes good money off of LSU football.

And the restaurants and hotels also make money when LSU plays at home. According to The Baton Rouge Advocate, room rates go up by an average of 34 percent on the weekends that LSU plays in Tiger Stadium. 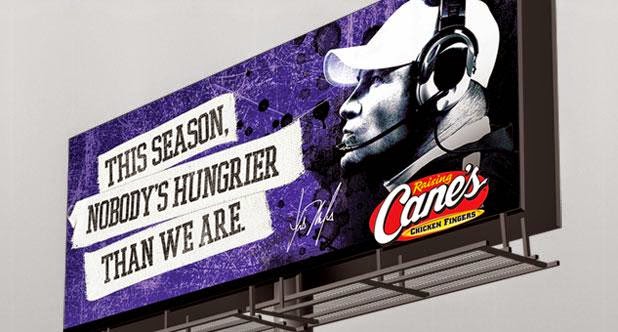 Other sectors of the Baton Rouge economy benefit as well.  LSU added 10,000 seats to its stadium last year at the cost of $80 million, making Tiger Stadium one of the largest college football coliseums in the country. It also added two high definition video screens that are so large that they can be seen from the Interstate 10 bridge over the Mississippi River.

But the big money goes to the coaches and athletic administrators. Les Miles, LSU's head football coach, makes $4.3 million a year, about five times what LSU's president makes; and that doesn't include bonuses and and any product endorsement deals Miles might pick up.  His face has appeared on advertisements for Raising Cane, a regional fried chicken chain, and I'm sure Les didn't lend his mug for free.

Joe Alleva, LSU's Athletic Director, is another guy who makes a handsome salary. The Baton Rouge Advocate reported that Alleva has been offered a contract extension that calls for  a $725,000 yearly salary and includes incentive bonuses that could push his annual pay to $900,000.  He will get a $100,000 bonus if LSU ranks in the top 5 in the NACDA Directors' Cup rankings--whatever that means.  And Alleva will get an additional $25,000 if he maintains "financial solvency, no major infractions, [and makes] substantial contributions to [the] university and surrounding community" (as quoted in The Baton Rouge Advocate).  What nonsense.

In fact, almost everyone in higher education admits that varsity sports--and football in particular--is all about the money. Still, LSU's home field opener last night was a particularly disgusting spectacle. It has become traditional for the nation's top college football teams to open their seasons by playing weak opponents who are lured into the stadiums by getting a share of the gate. This year, Sam Houston State University obligingly volunteered to be the sacrificial lamb, and got trounced before a crowd of about 100,000 fans (not counting thousands of fans who tailgated on the LSU campus yesterday).

The Baton Rouge Advocate reported this massacre on the sports page in headlines so  big you would have thought Les Miles had defeated ISIS.

Some day, of course, all these enormous college football stadiums will stand empty, just as the old Roman coliseums now do. People will wonder just what it was that people saw in watching young men assault each other on a field of artificial turf, just as we wonder why the Romans enjoyed seeing Christians being devoured by lions.

But for now, as Robert Earl Keen put it, "the road goes on forever and the party never ends."The executive sky boxes are full of wealthy businessmen who watch football games while sipping bourbon, and rich donors make tax-deductible contributions to LSU's three foundations, which have annual revenues totalling $100 million.  Who cares that Louisiana's educational system is crumbling and that almost half of Louisiana's children who start first grade never graduate from high school. All that matters, as LSU Athletic Director Joe Alleva phrased it,  is that LSU be "in the hunt" to win football championships.

Gary Laney. Les Miles Staying at LSU. ESPN, November 28, 2012.  Available at: http://espn.go.com/college-football/story/_/id/8687452/les-miles-remain-football-coach-lsu-tigers-receive-extension-raise
Posted by Richard Fossey at 11:32 AM No comments: