I've been to Georgia on a fast train honey,
I wudn't born no yesterday.
Got a good Christian raisin' and an eighth-grade education
Ain't no need in y'all a treatin' me this way.
Billy Joe Shaver

A while back, I met an elderly man who told me he had grown up in the Texas Panhandle back in the 1950s.  As a child, he spoke with a strong West Texas accent. But then his family moved to Arizona, and no one could understand him at his new school.

Fortunately, the man recounted,  an Arizona teacher began tutoring him on a one-to-one basis and taught him to speak standard English without a Texas accent. "If it hadn't been for that teacher," he said, "I would never have made a success of my life."

This man's story made an impression on me because I grew up in western Oklahoma, where the people speak very much like the West Texans.  To this day, I have some range dust in my diction; and I think at least some of my classmates at Harvard wrote me off as hick when they first heard me speak.

Now there is a movement to de-emphasize standard English because it disadvantages minorities--particularly African Americans.  For example, Professor Asao Inoue of Arizona State University argues that students should not be graded based on the quality of writing but "purely by the labor students complete . . ."

Why should professors stop grading students on the quality of their writing? "Because, Professor Inoue maintains, "all grading and assessment exist within systems that uphold singular, dominant standards that are racist, and White supremacist."

Rebecca Walkowitz, chair of the English Department at Rutgers University, is on Professor Inoue's wavelength. She sent an email recently, announcing an initiative to incorporate "critical grammar" into the department's pedagogy.

Critical grammar pedagogy, Professor Walkowitz's email stated, "challenges the familiar dogma that writing instruction should limit emphasis on grammar/sentence-level issues so as not to put students from multilingual, non-standard 'academic' English backgrounds at a disadvantage."

Professors Inuoue and Walkowitz's views on language are in harmony with the ebonics movement, which asserts that Black English should be regarded as a language in its own right and not a substandard dialect of proper English.

I sympathize with the academics who argue that we should show more respect for non-standard English. Indeed, some of America's greatest literature contain expressions in non-standard dialect. Huckleberry Finn, for example. And the lyrics of country music (which I love) are full of non-standard English phrases.

Nevertheless, I believe all Americans should strive to master standard English in both their speech and their writing. After all, shouldn't we endeavor to build a common culture? And if that is so, isn't a common culture built on a common language?

I acknowledge that some Americans grew up in subcultures that did not value standard English. Those subcultures should not be denigrated.  I said "y'all" as a kid, and I still say "y'all."

But standard English is not that hard to learn. I keep Strunk and White's Elements of Style on my desk, which I consult occasionally; and I subscribe to Grammarly, an online editing tool that checks my writing for spelling and grammar. All our commuters have a spell check function.

Besides, every young American must eventually leave academia, where grammar and spelling are being emphasized, and get a paying job. American employers may insist that their employees write and speak in standard English. Indeed, job candidates who misspell words on their job applications and converse in an obscure dialect may not get hired.

In my view, academics who want to deemphasize standard English grammar and diction are doing their students a disservice. Millions of young people are graduating from universities with crushing student loans. If they leave college speaking and writing no differently from when they entered, what was the point of all that education? 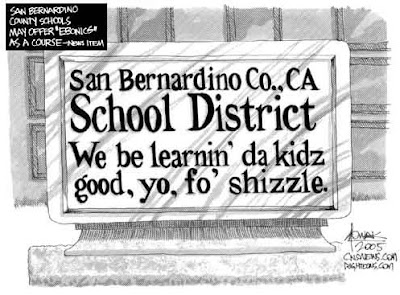 Posted by Richard Fossey at 12:39 PM No comments: