Any excuse for a slumber party, right?

Senate Democrats bitterly opposed DeVos's nomination, but that battle is over. Now is a good time for Democrats and Secretary DeVos to cooperate on a common objective--an objective that should attract broad bipartisan political support.

So here's what I suggest: relief for elderly student-loan debtors.

Senators Claire McCaskill and Elizabeth Warren supported a bill in 2015 that would stop the federal government from garnishing the Social Security checks of elderly and disabled people who defaulted on their student loans.  The bill got nowhere.

The Senators also asked the Government Accountability Office to prepare a report on elderly Americans with student loan debt, and GAO delivered that report last December. The report was widely covered by the media and contained some fascinating information.

Surely, Senators McCaskill and Warren can muster bipartisan support for legislation that will stop the federal government from garnishing the Social Security checks of elderly student-loan defaulters. Perhaps they might ask for a couple of Senate Republicans to join as co-sponsors. I suggest Senator Lisa Murkowski of Alaska and Susan Collins of Maine. Both voted against Ms. Devos' confirmation.

And I'll bet Senators McCaskill and Warren could get Betsy Devos and the Department of Education to endorse the bill. At least they could ask.

Who would oppose such a bill? I don't think anyone would.  What a wonderful message such a law would send to the American people: the message that our elected leaders--Congress and the Executive Branch--can work together to advance the common good.

On the other hand, if Congress and the U.S. Department of Education can't cooperate to get this wholly beneficial legislation adopted, then the political process is indeed broken. 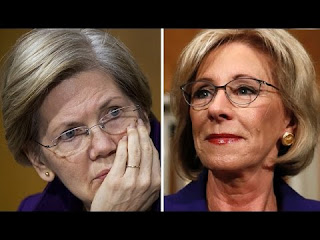