Student Debt Strike, an online Reddit community, advocates for a mass student-debt strike as the best way to pressure Congress to grant wholesale student-loan forgiveness.  I totally support this group's goals.
Economist Stephanie Kelton and others have argued persuasively that forgiving all federal student-loan debt would stimulate the economy. Relieved of burdensome student loans, more than forty million Americans would be free to buy homes, start families, and save for their retirement.
Furthermore, I agree with Professor Kelton, who believes the federal government can handle massive student-loan forgiveness without wrecking the economy. The feds can simply select one of its many accounting gimmicks to absorb the loss, much as it dealt with the savings-and-loan crisis in the 1980s, the real-estate turmoil of 2008, and Puerto Rico's bankruptcy.
After all, $1.7 trillion in outstanding student-loan debt is peanuts to a nation with a federal deficit that tops $30 trillion. What's $1.7 trillion among friends?

Nevertheless, it is dangerous for people to participate in a student-loan strike by refusing to make their monthly loan payments.

First, defaulting on a student loan is catastrophic for the individual debtor. Interest and penalties add up and get added to the loan balance. Over time, a student-loan defaulter's loan balance can double, triple, and even quadruple.

Secondly, I do not believe a student-loan strike will have the desired effect on Congress. Thus far, Congress has shown little appetite for reforming the federal student loan program. Political pressure from the higher education industry (including the for-profit colleges) has blocked reform.

Besides, a significant percentage of college borrowers are already on strike because they have defaulted on their student loans. In a 2018 report, the Brookings Institution calculated that 40 percent of student borrowers may ultimately default on their student-loan obligations. If that is not a strike, I don't know what is.

If I thought a student-debt strike had any chance of succeeding, I would support it 100 percent. But I'm afraid strikers will simply be labeled as deadbeats without moving the needle on reform or loan forgiveness.

Much as I hate to admit it, I think the best option for an overburdened college-loan debtor is to sign up for the most generous income-based repayment plan that is available.

Someday, the student-loan crisis will become so massive and so scandalous that Congress will be forced to act--either by canceling all student debt or easing the path to bankruptcy relief.

Unfortunately, I think that day is a long way off. 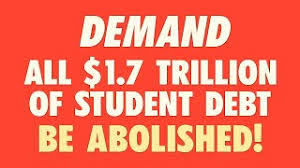 Posted by Richard Fossey at 2:15 PM No comments: