How many times have we seen those nature programs showing thousands of wildebeests thundering across the African plains, trailed by hungry lions just waiting for a chance to pull down a sick or injured animal?

Many beleaguered American college presidents must feel like those wildebeests--desperately hoping to outrun the hungry lions of financial reality.

First of all, enrollments dropped precipitously at many colleges and universities over the past few years due to various reasons, including demographics. There just aren't as many college-aged individuals as there were a few years ago.  In Pennsylvania, for example, enrollments in the state's university system have dropped 20 percent in the last few years.

Small, private colleges have suffered the most from this demographic downturn, which has forced some of them to close. Their situation hasn't been helped by a declining interest in the liberal arts and the humanities.  These little colleges' mission is to prepare students for adulthood by providing a sturdy liberal arts education. Now the kids don't want a degree in history or English.  They elect to become business majors.

Secondly, universities across the United States have been hit with a spate of lawsuits brought mostly by male students who were suspended or expelled for sexual misconduct.  These students have charged colleges with kicking them out of school without giving them a fair hearing, and several federal courts have responded sympathetically to that argument.  Quite a few of these cases have made it into the federal appellate courts.

In a 2018 scholarly article, Diane Heckman listed fifteen federal-court decisions in 2018 involving claims that a college mishandled its sexual assault hearings. Five of these opinions were at the federal appellate court level. I haven't seen the numbers, but I feel sure this litigation has accelerated.

And then the coronavirus pandemic showed up.  The universities spent lots of money to keep their campuses safe, but a new COVID outbreak seems to break out every day at one college or another.

Students who test positive for the virus are being quarantined in their dorms, making them unhappy campers. After all, the whole point of going to college for many young people is to drink beer and party in the new hook-up culture.  Can't go out at the weekend?  That's a bummer, man.

Parents are understandably leery about putting their sons and daughters in a college dorm where they live cheek to jowl with peers who engage in risky behavior. Consequently, fewer students are choosing to live in the residence halls. This is a huge problem for the universities because they need dorm revenues to service their student housing debt.

And now the colleges have been hit with a tidal wave of class-action suits brought by students who want a refund or at least a partial refund for their spring tuition.  They argue, quite plausibly, that the quality of their education deteriorated when the universities closed their campuses last March and switched instruction from face-to-fact to an online format.

How many of these lawsuits have been filed? According to a law firm that keeps track of this litigation, students have filed more than 160 lawsuits demanding tuition refunds.  If a college loses one of these suits, it will be required to reimburse all its students for part of their spring tuition and fees--a crushing cost for most schools.  In fact, a court order requiring a college to give students their money back will likely be a death sentence for a small, private liberal arts school.

Hardly anyone saw the coronavirus coming, so no one can reasonably blame the universities if they failed to respond perfectly to the pandemic. We still don't know a lot about this plague, and the nation must steel itself for millions of more cases before a vaccine becomes widely available.

Nevertheless, many weak collegiate wildebeests will be dragged down over the next 12 to 18 months.  A few professors who believed they had lifetime job security will learn that they can be laid off if their employer experiences a genuine financial emergency. And those small-town businesspeople who depend on college students showing up every fall with their parents' credit cards will see their standard of living drop.  Those people, too, will find they have become the metaphorical equivalent of a weak and wounded ungulate running for its life from a pack of hungry lions. 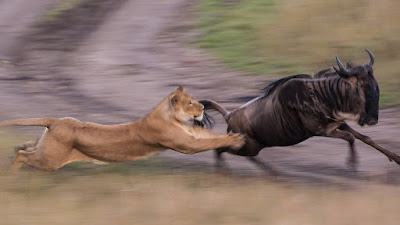 Posted by Richard Fossey at 7:21 AM No comments: