You can't win if you don't play: More people should attempt to discharge their student loans in bankruptcy

It's a mess, folks. Seven million people are currently in default on their student loans. Millions more have stopped making payments but aren't counted as defaulters because they obtained economic-hardship deferments, which are given out like candy.  Almost 4 million people are making payments under income-based repayment plans that can last as long as 25 years. Twenty-five years!

Why don't some of these overburdened student-loan debtors file for bankruptcy?  I'll tell you why. Most people believe it is impossible to obtain relief from their student loans in the bankruptcy courts.

But that's not true. Three years ago, Jason Iuliano published an empirical study of student-loan discharges under the Bankruptcy Code's "undue hardship" provision. This is what he found:


The problem, according to Iuliano, is not that it is impossible to obtain a discharge of student loans in bankruptcy. THE PROBLEM IS THAT MOST PEOPLE DON'T TRY.

In 2007, Iuliano reported, almost a quarter of a million people with student loans filed for bankruptcy (238,446 to be exact). Of that number, less than 300 even attempted to discharge their student loans in bankruptcy. Apparently they assumed that it would be useless to try.

Iuliano constructed a model for predicting which factors were most important in obtaining a student-loan discharge. He estimated that 69,000  student-loan debtors  who filed for bankruptcy in 2007 were good candidates for discharge if they had only applied for relief.

In other words, based on Iuliano's research, more insolvent student-loan debtors should be seeking to discharge their student loans in bankruptcy because a fair percentage are likely to be successful. But you can't win if you don't play.

Iuliano's article was published in 2012 based on 2007 bankruptcy data. I think the percentage of successful student-loan discharges would be higher today than it was during the period Iuliano studied. Several recent bankruptcy court decisions show that at least some courts are beginning to view student-loan debtors with more compassion than courts once did.

In the Roth case, for example, the Ninth Circuit's Bankruptcy Appellate Panel rejected a loan creditor's argument that Ms. Roth should be put in a 25-year repayment plan. "The law does not require a party to engage in futile acts," the court said.   Roth was a 68-year old woman with chronic health problems living on a Social Security check of less than $800 a month. It would be futile, not to mention callous, to put her on a 25-year income-based repayment plan.

Of course, the Department of Education and its student-loan debt collectors aggressively oppose student-loan discharge efforts in the vast majority of cases, often filing technical motions that make the  discharge process more expensive than necessary. I think  the creditors file these motions to discourage student-loan debtors who file adversary actions without the help of a lawyer.

Of course, hiring a bankruptcy lawyer to fight the Department of Education can be expensive, and people in bankruptcy generally don't have the money to hire lawyers. Nevertheless, a lot more insolvent debtors should be trying to discharge their student loans in bankruptcy, even if they must do so without a lawyer.

And here are my suggestions for giving overburdened but honest student-loan debtors some bankruptcy relief:

1) Legal Aid clinics should get in the business of representing student-loan debtors. Legal aid clinics, including those that are attached to law schools, should have their attorneys become experts in bankruptcy law--especially the evolving law that relates to student loans; and the clinics should start representing student-loan debtors who seek to discharge their student loans in the bankruptcy courts.

2) Public interest organizations should develop free web sites that would provide useful information to people who are seeking to discharge their student-loans in bankruptcy without lawyers. The site should include sample pleadings and sample discovery motions, recent research on student-loan bankruptcies, recent court decisions, and sample briefs that could be used as models for debtors who are fighting the technical motions that DOE and the debt collectors file.

Can you imagine the impact if 5,000 people tried to discharge their student loans in the bankruptcy courts rather than the mere 300 who tried in 2007? I think these people would find the bankruptcy courts are much more sympathetic than the debtors might have expected. More and more frequently, the bankruptcy judges are reviewing the details of these pathetic cases and seeing people who borrowed money in good faith to attend college and simply never made enough money to pay it back. Divorce, illness, unemployment, poor choices in deciding on a major, unscrupulous for-profit colleges--all kinds of unexpected things happened to people who simply wanted to get the training they needed to obtain better jobs so they could support their families and have better lives.

As I have said, the bankruptcy courts are becoming more and more sympathetic to these people.  But distressed student-loan debtors have got to ask for bankruptcy relief in order to get it. 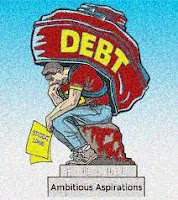