Distressed debtors cannot discharge student loans unless they can show their loans constitute an "undue hardship" to themselves and their dependents. Congress did not define undue hardship in the Bankruptcy Code, so it was left to the courts to define the term.

Most courts have adopted the Brunner test for determining when a student loan is an undue hardship that can be discharged in bankruptcy. That test has three parts:

1) Can the debtor pay back the loan while maintaining a minimal standard of living?
2) Will the debtor's financial circumstances change during the lifetime of the loan?
3) Did the debtor handle his or her loans in good faith?


[A]ny test that allows for the court to determine a student debtor's good or bad faith while living at a subsistence level, virtually strait-jacketed by circumstances, displaces the focus from where the statute would have it: the hardship. It also imposes on courts the virtually impossible task of evaluating good or bath faith in debtors whose range of options is exceedingly limited and includes no realistic hope of repaying their loans to any appreciable extent. . .(p. 566)

Judge Bailey argued for a simpler and fairer standard for determining when a student loan can be discharged in bankruptcy: "If a debtor has suffered a personal, medical, or financial loss and cannot hope to pay now or in the reasonably reliable future," the judge reasoned, "that should be enough" (p. 565) (italics supplied).

Let's take the Smith case as an example:

1) First of all, the U.S. Department of Education has publicly proclaimed it will not oppose bankruptcy relief for student debtors who are disabled. Mr. Smith is disabled; and Smith and his mother subsist entirely on Smith's monthly disability check, food stamps, and his mother's tiny Social Security income. Thus, DOE was opposing Mr. Smith's plea for bankruptcy relief in direct contradiction to DOE's own policy. In my opinion, that shows DOE's bad faith.

2) In a 2015 letter, a Department of Education official said DOE would not oppose bankruptcy relief when it made no economic sense to do so. Smith's adversary proceeding stretched out over five days, taking up Judge Bailey's time; and both Smith and DOE had lawyers. (In fact, DOE had two lawyers.) Smith only borrowed $29,000; and the litigation expenses almost certainly exceeded that amount. In my view, DOE's decision to chase Smith into bankruptcy court is additional evidence of bad faith.

3) Finally, DOE insisted Smith should be put in a long-term income-based repayment plan, even though it admitted Smith's income was so low that his monthly loan payments would be zero. So what was the point of fighting Smith in bankruptcy court? Again, this is more evidence of DOE's bad faith.

In fact, the Department of Education and the student loan guaranty agencies (ECMC in particular) almost always argue that a distressed student-loan debtor filed for bankruptcy in bad faith. And this is true even when the debtor is hovering on the brink of homelessness.

After all, in the Myhre case, DOE opposed student-loan debt relief for a quadriplegic whose expenses exceeded his income.  In the Abney case, DOE fought Kevin Abney, who was so poor he did not own a car and traveled to work on a bicycle. And in the Stevenson case, ECMC objected when Janice Stevenson, a woman with a record of homelessness and who lived in subsidized housing, tried to discharge almost $100,00 in student loans.

So Judge Bailey is right. The federal courts should stop asking whether down-and-out student-loan debtors handled their student loans in good faith. The only important questions are these: Can the debtor pay back his or her student loans? Will the debtor ever be able to pay back those loans?

And if the courts continue to insist on looking for bad faith, they should look for it by the Department of Education, ECMC, and the entire gang of government-subsidized debt collectors. 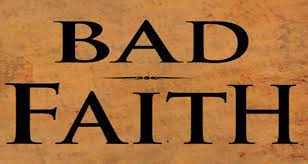 Some physical or mental impairments can qualify you for a total r permanent disability discharge on your federal student loans and/or TEACH grant service obligation. U.S. Department of Education web site (undated).

Posted by Richard Fossey at 8:42 AM No comments: