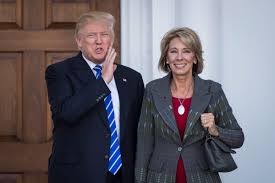 
Posted by Richard Fossey at 10:55 AM No comments:

Why Does the Department of Education Hate Student Loan Debtors Just So Much? Article by Steve Rhode

If I was ever to get into an academic research argument on the role of government, this would be the time. Frankly I’m just getting pissed off by the apparent disregard for student loan debtors by the Trump Department of Education. And before you react that this is a Trump reaction, it’s not. This is an outrage and embarrassment of the actions taken collectively against consumers and student when it comes to student loan debt.

We the People of the United States, in Order to form a more perfect Union, establish Justice, insure domestic Tranquility, provide for the common defence, promote the general Welfare, and secure the Blessings of Liberty to ourselves and our Posterity, do ordain and establish this Constitution for the United States of America. – Source

The last administration was trying to protect students from being misled by schools to enroll them based on false promises and employment assertions. That’s been significantly halted.
The previous administration expanded the Borrower Defense to Repayment program to allow students who had been defrauded by their schools a chance to have their loans forgiven and the loans clawed back from the schools. That’s been significantly halted.
The Consumer Financial Protection Bureau (CFPB) is suing Navient over poor student loan servicing and Navient says it has no duty to provide good advice to student loan debtors. The Department of Education is not participating in that fight by backing up the CFPB and in fact has said they will stop sharing information with the CFPB.
Now we will have to see what the Department of Education does next on this. The student loan lending industry is making the argument to the Department of Education they should not be subject to state probes into their industry. The position is the federal law and should prevent states from investigating the abusive practices of the student loan industry.
Just to show you how crazy this has all become, even Texas thinks this argument is crap and Texas has typically been the business comes first state.

“Joining a bipartisan coalition of 25 states, Attorney General Ken Paxton today called on U.S. Secretary of Education Betsy DeVos to reject a campaign by student loan servicers and debt collectors to dismantle state oversight of the student loan industry. In recent years, Texas and other states investigated and prosecuted a number of student loan industry abuses, winning settlements in the tens of millions of dollars for vulnerable student borrowers.
In a letter to Secretary DeVos, Attorney General Paxton and his counterparts point out that the student loan industry continues to lobby the U.S. Department of Education for more control and autonomy at a time when it is still in urgent need of reform.” – Source

If the Department of Education was doing anything to hold schools and lenders accountable for the massive levels of student loan debt issued with fraud and serviced with incompetence then maybe all of these events would not matter, because they would not happen or be allowed to continue.
But I’ve got an old expression for you: If it looks like a duck, swims like a duck, and quacks like a duck, then it probably is a duck.

This article appeared on the Personal Finance Syndication Network web site and also on The Get Out of Debt Guy site. Steve Rhode is the Get Out of Debt Guy and has been helping good people with bad debt problems since 1994. You can learn more about Steve here.
Posted by Richard Fossey at 6:52 AM 1 comment: