Three moves equal one fire: In these troubled times, shelter should be the first priority.

In the early 20th century, a lot of Americans in the rural South were tenant farmers; and they often moved from farm to farm to remain employed. "Three moves are as bad as a fire," was a common observation because the disruption, property loss, and cost of moving could be devastating. Three such moves caused as much damage as one fire.

According to the Aspen Institute, as reported by Steve Rhode, "One in five of the 110 million Americans who live in renter households are at risk of eviction by September." Most of these people live in urban areas, but the trauma and loss caused by eviction are just as devastating for them as for the Southern tenant farmers who lost their homes a hundred years ago.

Being evicted often means that parents have to pull their children out of school in midyear, which disrupts their kids' education. Renting another apartment usually requires the new tenant to come up with a security deposit, which may be impossible for people who have no savings and no credit cards. Moving to a new apartment also means having to open a new account for electricity and water, and often the utility companies require a deposit.

Three moves equal one fire in modern America. And people who can't scramble successfully from one rented apartment to another become homeless.

Our federal government has distributed massive infusions of cash into the American economy to offset the economic calamity caused by COVID-19. Still, a lot of that money went to people who don't need it. More than 600,000 businesses benefited from the Payroll Protection Program, including 1,400 investment advisors.

Poor people, on the other hand, have received scant relief.  The government mailed out  $1,200 one-time checks a few months ago, but that amount may not cover a month's rent.  Congress fattened people's unemployment checks by $600 a month--a significant benefit, to be sure, but this aid is temporary.

Matthew Desmond called for radical changes in housing policy in his 2016 book titled Evicted: Poverty and Profit in the American City. He argues for universal housing vouchers to guarantee that every American would live in a home that is "decent, modest, and fairly priced."

In the short term, I don't see significant changes in national housing policy.  But this much seems clear. The federal government needs to devote a substantial amount of its coronavirus-relief money to making sure unemployed, and low-income Americans can stay in their rented homes.

The coronavirus pandemic: Is it time to stock up on canned goods and ammunition?

On the last day of February, I was attending the annual meeting of the Texas State Historical Association in Austin, Texas. I was thinking about history, not the coronavirus.

Today, I am "sheltering in place" in my home in Baton Rouge and 10,000 Louisianians have been diagnosed with COVID-19. As Bob Wills and the Texas Playboys reminded us during the Great Depression, "Time changes everything."

In the twinkle of an eye, the stock market plummeted more than 11,000 points. Retired Americans lost a substantial amount of their saving, which they probably won't recover. The Federal Reserve Bank of St. Louis predicts an unemployment rate of more than 30 percent in the coming months, higher than during the Great Depression.

In my own extended family, four people have lost their jobs. My niece and her husband worked in New Orleans restaurants, and now they are both out of work. They have two small children.

Handguns, shotguns, and assault rifles are flying off the shelves, and some stores have run out of ammunition. A gunshop in my city ran a firearms sale recently, and you could pick up a 9 mm semi-automatic for less than $300.

Is it time to start stockpiling canned goods and ammunition?  I say not yet.

Americans are confident and self-reliant people. Our medical researchers and researchers in Asia and Europe will come up with a vaccine for coronavirus, and then we will all get vaccinated.  I believe we will conquer this virus within a couple of years at the latest.

The economy, however, is another thing entirely. President Trump signed a $2 trillion relief bill intended to head off a Depression.  But our government was running a deficit budget even before the pandemic began, and a $2 trillion bailout by itself won't bring my relatives' jobs back.

For a long time now, Americans have been living like "the road goes on forever, and the party never ends." But the party is over. At the governmental level and the personal level, we've borrowed too much money, and we can't pay it back.

We can take out more credit cards and print more money, but our reckoning day is near. When will it be time to start stocking up on canned goods and ammunition? Perhaps when the California and Illinois pension funds collapse.  Or when China starts dumping U.S. bonds. 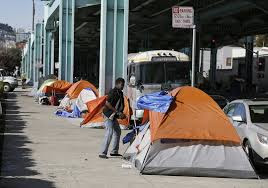 Posted by Richard Fossey at 9:49 AM No comments:

Attention, Student-Loan Debtors: You Are Being Evicted from the Middle Class

Evicted: Poverty and Profit in the American City tells the story of how greed and the nation's legal system have driven poor Americans to the brink of homelessness.  Author Matthew Desmond follows the lives of eight Milwaukee residents who scramble from day to day to avoid being evicted from their homes and thrown into the street. It is a good read, and I highly recommend it.

As I read Desmond's book, I was struck by the similarity between the low-income housing crisis and the student-loan crisis.  As Martin Luther King observed, "Every condition exists simply because someone profits by its existence." Slumlords profit from renting substandard housing to the poor; stockholders and hedge fund owners profit from for-profit colleges.

And slumlords and for-profit colleges both rely on the government to help them exploit the poor. Slumlords can call on the local sheriff to evict tenants for nonpayment; and for-profit colleges rely on Betsy DeVos's Department of Education to protect their venal interests. Landlord-tenant laws favor the landlords, and the Bankruptcy Code protects the banks, which loan money to students at exorbitant interest rates, knowing that student debtors will find it almost impossible to discharge their onerous debts in the bankruptcy courts.

As Desmond wrote in Evicted, "The United States was founded on the noble idea that people have 'certain inalienable Rights, that among these are Life, Liberty and the pursuit of Happiness."  Indeed, the nation's founders considered these rights to be God-given and "essential to the American character."

Desmond argues that "the ideal of liberty has always incorporated not only religious and civil freedoms but also the right to flourish." In twenty-first century America, people need decent housing to flourish and they also need freely accessible education.

But our federal student-loan program is designed to extinguish the American right to pursue happiness and to flourish. The federal government allows corrupt for-profit colleges to lure vulnerable people into enrolling in education programs that are far too expensive and often worthless. The victims are forced to take out student loans. And the federal government stands by to be every student's sugar daddy--distributing about $150 billion a year in various forms of student aid.

The for-profit colleges get more than their fair share of federal money. In fact, many of them receive from 80 to 90 percent of their entire operating budgets from federal student loans and federal Pell grants.

America will not begin solving the student-loan crisis until our nation's leaders acknowledge that the federal student-loan program is a massive human rights violation that is evicting millions of people from the middle class. Students who took out loans to attend for-profit colleges have been especially hard hit; almost half the students who took out loans to attend a for-profit college default on their loans within five years.

Student debtors are defaulting at the rate of 3,000 people a day, which ruins their credit and leaves them vulnerable to having their wages garnished. The government can even seize part of an elderly defaulter's Social Security check.

How can higher education return to decency and sanity? First, we must remove Betsy DeVos from her post as Secretary of Education. DeVos is about as qualified to run the Department of Education as the late Charlie Manson. And then we must revise the Bankruptcy Code to allow honest but unfortunate student debtors to discharge their loans in bankruptcy court. And finally, we must shut down the for-profit college industry, which DeVos so assiduously protects.


Posted by Richard Fossey at 11:10 AM No comments: