"Nothing was delivered," the Byrds sang more than fifty years ago, and "nothing was received."

I have no idea what the Byrds were singing about when they cut Nothing Was Delivered, but they might have been referring to college degrees.

In 2015, the Department of Education posted its College Scoreboard, allowing people to determine the return on investment for thousands of academic programs across the United States. Several think tanks and policy organizations analyzed the data, and their findings are sobering.

According to Third Way, "a center-left, public policy group," people who graduate in electrical engineering and nursing have very high returns on their investment. Most will be earning more than their student debt within five years of graduation.

On the other hand, the Foundation for Research on Equal Opportunity has terrible news for people getting degrees in the liberal arts. The poor schmucks who study art, music, philosophy, religion, and psychology are likely to end up financially worse off than if they had never gone to college.

If you want to know more about the financial costs of majoring in liberal arts or the social sciences, you can read the various think-tank reports or the articles posted by the New York Times and the Washington Post.

But the bottom line is this. Given the transformation of the American workplace, with its increased focus on technological skills and mathematics, you would be nuts to take out student loans to get a college degree in a major that does not lead to a good job.

Why do so many colleges offer degrees that don't lead to remunerative employment? A couple of reasons. Schools have thousands of tenured professors teaching subjects for which there is falling demand. No one wants to take Professor Egghead's course on Martin Heidegger, Friedrich Nietzsche, and Soren Kierkegaard. Still, the old gasbag is tenured, and he's going to hang around the university until he is in his eighties.

Second, American universities are not subject to the laws of supply and demand. Enrollments in the humanities and the social sciences have been shrinking for decades. Colleges don't close these programs; they simply raise their prices to cover the growing cost of their bloated overhead and their unproductive faculty.

Students don't complain about rising tuition prices because they take out student loans to pay their tuition bills.  Millions of rubes don't realize they've been swindled until they graduate and suddenly realize they're hopelessly mired in college debt and have no job prospects.

As Friedrich Nietzsche observed, "Sometimes people don't want to hear the truth because they don't want their illusions destroyed." That's good advice. Maybe Nietzsche was trying to warn people not to major in philosophy.

Posted by Richard Fossey at 8:02 AM No comments:

Did you major in liberal arts? You may be the 21st-century equivalent of a blacksmith

I grew up in a small western Oklahoma town where middle-class families worked at jobs that no longer exist. People owned their own gas stations in those days, and a man could make a modest living by selling gasoline (regular or ethyl), repairing cars, and fixing flats.

And there were 10 or 12 little grocery stores in my hometown. Everyone lived within walking distance of at least one. These were mostly run by widows who supplemented their modest Social Security checks by selling milk, bread, and canned goods in the front room of their homes. And soda pop. As a kid, I'm sure I bought at least one Grapette at every one of those little stores.

All these businesses are long gone--wiped out by Walmart and corporatism in general.

Something similar is happening in the field of liberal arts. People who get college degrees in the humanities, liberal arts, or the social sciences will find it damned difficult to find a job. And people who went into debt to get a degree in comparative religions or sociology may have committed financial suicide on the day they selected their majors.

People who get Ph.Ds in those fields are not likely to find jobs either--at least not teaching jobs at the university level. As the New York Times reported today, colleges across the country are slashing budgets in response to the coronavirus pandemic. And they are laying off faculty members--both tenured and untenured. Most of those laid-off faculty members teach in the liberal arts.

Not too long ago, tenured faculty members had rock-solid job security. Unless they committed a violent felony or said something unforgivable like "All Lives Matter," they could be assured of keeping their job until they tottered off to a comfortable retirement, made possible by a fat pension and lifetime health insurance.

But no more. Universities are enrolling fewer students, and those students are more likely to major in business than the humanities. Professor Whatshisname still teaches his seminar on the causes of the Crimean War (his dissertation topic), but nobody wants to borrow tuition money to listen to his lecture.

But you won't. If you pursue a doctorate in liberal arts intending to become a professor, you are probably on a fool's errand. Like the blacksmith of yesteryear, no one will want to hire you. And if you borrowed money to pursue your foolish dream--you are a dead person walking--at least in terms of your financial wellbeing. 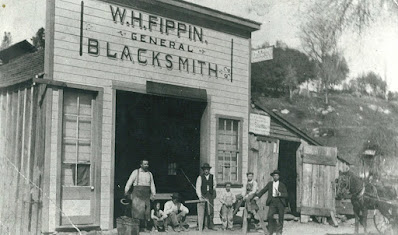 Posted by Richard Fossey at 3:34 PM No comments: