The Middle Class is Shrinking, But You Already Knew That

In recent years, the Brooking Institution published a series of papers as part of its Future of the Middle Class Initiative. In a 2020 paper, Brookings defined the Middle Class as the middle 60 percent of household income distribution--"not poor, but not prosperous either."

How much income must a family have to be considered middle class under the Brookings definition? Its paper says that the average middle-class income is about $70,000, and a family of three would have to have an income of between $40,000 and $154,000 to be middle class.

In a 2022 paper, Brookings examined wealth accumulation across generations.  This paper is accompanied by dizzying charts and data, but I think a fair summary is this: Rich people tend to stay rich across the generations, and poor people are more likely to remain poor.

I am somewhat jaundiced about all this Brookings analysis. First, anyone who claims (as the 2020 Brookings paper did) that a family of three living on $40,000 a year is a middle-class family has not lived with two people on forty grand a year. That definition is simply not accurate.

Secondly, I believe the American middle class is disappearing so fast that it is misleading to even speak of a middle-class America.

Robert Reich, President Clinton's Labor Secretary, wrote a book in 1991 titled The Work of Nations. Reich said that the top 20 percent of income earners--"the fortunate fifth"--were prospering in a global economy and lived in a different world than the rest of us.  The Fortunate Fifth live in gated communities or secure luxury apartment buildings, send their kids to private schools, and have little interest in what is happening to the rest of us.

I think Reich's 1991book was prescient in its analysis.  Today, the wealthiest Americans tend to be clustered on the East and West Coasts. Many have acquired their wealth by financial manipulation and speculation. Their interests and desires are endorsed by the elitist media, national political leaders who cater to corporate lobbyists, and the nation's wealthiest universities.

In short, the Fortunate Fifth doesn't give a damn about the bottom 80 percent, who see their lifestyles declining rapidly due to inflation, growing household indebtedness, and diminishing opportunities to prosper.

As I said, America is disappearing as a nation of middle-class families prospering in a democratic society. Our country has become an oligarchy--controlled by powerful people who don't care about the shrinking middle class and, in fact, despise us.

Perhaps that is why the people traveling from coast to coast in private jets refer to the places where most Americans live as flyover country. 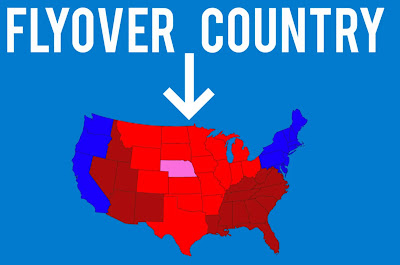