Planning on going to college this fall? Why not wait a year or two?

Since time immemorial, middle-class parents have urged their children to get a college education. A college degree, parents believed, was the indispensable ticket to a good life.  College was where young people prepared for the world of work, where they often met their future spouses, and where they formed lifelong ties to classmates.

But listen carefully. Times have changed. The coronavirus, campus unrest, and a troubled economy have undermined the value of a college degree. If you are thinking about enrolling for college this fall, you might want to postpone that plan--at least for a year. And here is why:

The coronavirus pandemic. First of all, the COVID-19 epidemic forced virtually every American college to close last spring and to shift from live instruction to a distance-learning format.  Most schools have announced that they will be teaching their courses online this fall.

Moreover, dorm life, college sports, and extracurricular activities will all be negatively impacted by the coronavirus.  In short, going to college next year may not be much fun.

Colleges and universities will learn to adapt to a post-pandemic world, but it will probably take a couple of years before they figure it out. Why not postpone college for a year or two while this transition is ongoing?

Less police protection.  Colleges have a legal duty to keep their students safe on campus and in the dorms. Most colleges meet this responsibility by maintaining a campus police force.

In the wake of George Floyd's killing, however, many colleges and universities are facing intense pressure to dismantle their police forces. As Insider Higher Ed recently reported:

So if you go to college this fall, there is a good chance that police protection on your campus will be diminished from what it was a year ago or even eliminated.  In my view, this is another reason to postpone going to college. Wait until the debate about campus law enforcement is resolved before embarking on your college career.

Growing uncertainty about the worth of a college degree. Although the higher-education industry tirelessly touts the value of college education, that mantra is becoming shopworn.

Without question, the cost of going to college is far too high.  In particular, students who take out student loans to major in "soft" disciplines (social sciences, humanities, gender studies, etc.) are finding that their degrees leave them with massive debt and no job.

Some young people go to college with a clear idea about how their degree will qualify them for vocations in such fields as engineering, business, computer sciences,  or medical technology. But others are clueless about why they are on campus.

If you have only a hazy notion about how you want to make a living, you should strongly consider working for a year after graduating from high school. You should use the time to reflect on your future and explore alternatives to chasing a college degree.

In my state, thousands of people have gotten technical training at vocational and community colleges and gone on to get good jobs with six-figure salaries.  If you ask these people whether they are sorry they didn't acquire a bachelor's degree, I think most will tell you no.

So think long and hard before going to college this fall, especially if you plan to finance your studies with student loans. Your chosen university will still be around in 2021 if you decide to pursue a college education. 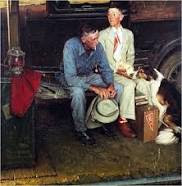 A liberal arts degree is not worth much: Don't borrow a lot of money to pay for one

Christ. Seven years of college down the drain. Might as well join the f-cking Peace Corps."

Americans cling to the touchingly pathetic belief that a college degree will improve their lives. And it is true that people who graduate from college make more money over their lifetimes than people who only have high school diplomas.

But in many instances, a college degree represents nothing more than an individual's dogged tenacity and willingness to sit through four years of meaningless classes--traits that make college graduates adaptable to the sterility and boredom of the American workplace.

That's not always true, of course. I feel quite sure that people who get degrees in engineering, journalism, and the health professions often learn valuable skills.

But a degree in the liberal arts or the social sciences is highly overrated as a ticket to a good job. Reflecting back more than 40 years from my time at Oklahoma State University ("the Princeton of the Prairies"), I realize I learned more about how to make my way in the world from delivering newspapers as a 12-year-old for the Anadarko Daily News than I did from any of my college courses.

And I received much more vocational guidance from my father than from any college professor. Not that my father gave a damn about what I would do for a living when I left home. But after holding down several hundred bull calves while he castrated them with his Schrade pocket knife, I came to the firm conviction that I would never make it as a cattleman.

At one time, going to college was a relatively harmless activity. Rattling around a campus for four (or five, or six) years didn't do young people much harm other than delay their entrance into remunerative employment. And no question about it--studying for exams improves people's short-term memory.

But things have changed. Today, making the wrong choices about going to college can lead to a lifetime of economic hardship, at least for people who borrow too much money to pay for their college education.

What can go wrong about obtaining a liberal arts education, you might ask?  Here are some mistakes that many people make:

So if you want to get a degree in sociology, history, literature, or women's studies, you should probably get it at a public university--even a mediocre one--rather than pursue a liberal arts degree at a for-profit institution.

2) Paying the sticker price to attend a prestigious private college.  Private colleges are more expensive than public colleges, but they are now discounting their tuition drastically. In fact, the average institutional discount rate at private colleges was 48.6 percent for first-time freshmen in 2015-2016. And the discount rate for all students attending private schools was 42.5 percent.

So don't pay the sticker price to attend a fancy private college. Keep in mind that many private schools are scrambling to keep their enrollments up, and they need you more than you need them.

3) Doubling down by going to graduate school without a clear idea how a graduate degree will improve your earning potential. About 40 percent of all outstanding student-loan debt was acquired by people who went to graduate school. Graduate education in some fields has become outrageously expensive--especially for law degrees and MBAs. But graduate degrees in the liberal arts are also pricey.

But the game has changed. Individuals who borrow money to get a liberal arts education and then borrow more money to go to graduate school are playing Russian Roulette with their financial futures; and they're playing with three bullets in their revolvers. Don't go to graduate school unless you have a clear idea about how a graduate degree will lead to a job that pays well enough to make the investment worthwhile.

Beware: A liberal arts degree is no sure path to a middle-class lifestyle

In sum, a liberal arts degree provides no sure path to making a living, and borrowing a lot of money to get a liberal arts education can lead to financial disaster. It is a fine thing to know a little Shakespeare and to be able to identify the causes of Thirty Years' War; and it's nice to talk literature with the swells. But if you leave college with a hundred grand in student loans, you will find that the liberal arts degree you acquired didn't enhance your life; in fact, it might have destroyed it.

Rick Seltzer. Discount rates rise yet again at private colleges and universities. Inside Higher Ed, May 16, 2016. Accessible at https://www.insidehighered.com/news/2016/05/16/discount-rates-rise-yet-again-private-colleges-and-universities
Posted by Richard Fossey at 6:34 PM 7 comments: