Why does Oklahoma have 8630 licensed marijuana growers and only 471 dairy farms?

When I was in college, it was a felony to possess marijuana in any amount. If the cops caught you with it, you could go to the state penitentiary for a very long time.

When I was a child, Oklahoma prohibited the sale of hard liquor. Okies could drink 3.2 percent beer (usually Coors), but they couldn't buy a bottle of whiskey or order an Old Fashioned in an Oklahoma restaurant.

When I was growing up, there was no legal gambling in Oklahoma: no lottery, no casinos, no slot machines, and no video poker.

My, how times have changed!

Medical marijuana has been legalized, and you can buy it in special dispensaries all over the state. The dispensary in my hometown of Anadarko is on Main Street.

Indeed, Oklahoma now has 8,630 licensed marijuana growers--18 times the number of dairy farms. The state lists them on a website, and ten growers give their addresses as Anadarko.

Once considered a grave sin in the Sooner State, gambling is now legal. The Native American tribes have casinos all over Oklahoma. One does business just two miles outside my hometown.

If you want to drink while you gamble (and who doesn't?), you don't have to find a bootlegger anymore. You can order a cocktail at the casino bar.

Even better, hardly anyone goes to church now. When I was a child, I got up on Sunday mornings, shined my shoes, put on my clip-on bow tie, and trotted off to Sunday School.

My teachers kept track of attendance, and if I had a perfect attendance record for one year, I received a lovely ceramic pin for the lapel of my little sports coat.

Everyone went to church in those days, and adults dressed up for the occasion. Most men owned one suit, which was reserved for weddings, funerals, and church.

Of course, a few people still attend church on Sundays in my hometown--primarily old people. But the church parking lots are no longer full.

Anyway, what do the pastors preach about now?  Don't drink? Don't gamble? Don't do drugs? Oklahoma's politicians tell us all that stuff's OK.

When I was a child, some evangelical ministers preached that going to the movies was a sin (and they may have been right!).  But there are no movie theatres in my hometown anymore, so why bring up the subject?

I wish I could say Oklahomans are happier now that they can drink, gamble, and smoke marijuana. But I don't think they are.

"A nation is not conquered until the hearts of its women are on the ground": I return to Anadarko

I grew up in Anadarko, a small town settled near the banks of the Washita River in southwestern Oklahoma's Caddo County.

Anadarko was a thriving community when I was a child. Family shops lined Broadway, the town's main street. Farmers and their families came to town on Saturdays to do their weekly shopping, and elderly Plains Indians gathered on the sidewalks, talking to one another in Kiowa and Comanche.

Our town boasted a fine Victorian courthouse, as elegant as any county courthouse in Texas. The town square had a bandstand and a statue honoring the Caddo County boys who died in the Great World War.

And what a statue! A life-size bronze figure of a doughboy stood on a granite pedestal, where the names of all the dead were listed. The soldier wore a campaign hat and a uniform with puttees. In one hand, he held the staff an American flag. In the other, he clutched the barrel of his Springfield rifle.

Facing the courthouse square stood the First Methodist Church, erected in 1917 in the Greek Revival Style. A Tudor-style Presbyterian church and the First Baptist Church also faced the square. All these churches were full when I was a child.

I returned to Anadarko a few days ago, and the town of my boyhood is gone. The county bureaucrats tore down the Victorian courthouse in the 1950s and replaced it with a concrete structure built in the mid-century modern style--which, of course, is no style at all.

The Presbyterian church still stands but is closed-- not enough Presbyterians to pay the light bill. The Methodist church can't afford its own preacher anymore and shares a minister with a nearby town. The Baptist church stands abandoned, although a new church was erected at the edge of town.

The bandstand is gone, and so is the bronze doughboy. All the local businesses are closed, wiped out by Walmart, which sells everything a rural Oklahoman could ever need.

Anadarko’s losses are sad, but the new town is sadder still.

I drove by the home my father built with his own hands in 1953. It is empty now and looked abandoned, just one of a few hundred abandoned houses in the town.

Anadarko had two movie houses when I was a kid, as well as a drive-in movie theater. They are all gone—killed off by television.

Of course, there are new things for the townspeople to do. The Plains Tribes are now in the gambling business, and the citizens of Anadarko can gamble with the Kiowa, the Comanche, the Fort Sill Apache, or the Wichita. Most casinos are open until 2 AM if they can’t sleep and want to play the slots.

When I was a kid, a person could be sent to state prison for possessing a single marijuana joint. But times have changed.

Now there’s a medical marijuana dispensary on Anadarko's Main Street. Of course, you have to have a medical prescription, but I don’t imagine it is difficult to find an accommodating doctor.

And my hometown's marijuana might have been grown locally. Oklahoma has hundreds of licensed marijuana-growing sites, and ten are near Anadarko.

Perhaps these marijuana greenhouses brought new jobs to Anadarko, which would be good. But no, growers bring in workers from outside.  Someone told me that some of the guys who grow marijuana in Caddo County are Chinese.

But at least the landscape of my childhood is still lovely—the stunning Oklahoma sunsets, the red-dirt hills, and the timeless vistas of the Great Plains.

But again, no. Corporate America has built hundreds of wind turbines in Caddo County—scarring the landscape I once believed could never be changed.

Anadarko—abandoned homes, closed businesses, a marijuana dispensary, and nearby gambling dens. No wonder many of the people I saw looked clinically depressed. The town has a high suicide rate—primarily young people.

As I stood in the courthouse square, I saw an empty lot where someone had painted a mural on the side of a building—a mural that proclaimed this cryptic message:

A nation is not conquered until the hearts of its women are on the ground.

I do not know if the hearts of Anadarko’s women are on the ground. But if they are not, the town has some goddamned strong women. 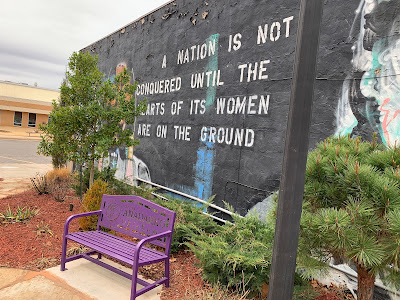