Approximately 52,000 Americans died from opioid overdoses in 2015. That's an average rate of  around 140 deaths a day. In fact, opioid overdose is now the leading cause of death for Americans under age 50.  If we continue at this rate, a half million Americans will die from drug overdoses over the next ten years--roughly nine times as many Americans as were killed in the Vietnam War.

But let's compare the opioid crisis to the student-loan disaster.  Last year, 1.1 million Americans defaulted on student loans; that's an average rate of 3,000 people a day.  Obviously, defaulting on a student loan is not as serious as dying from a drug overdose. Nevertheless, the consequences of student-loan default are catastrophic.

In short, people who default on their student loans run a good chance of becoming lifetime debtors who will never improve their economic circumstances. In other words, a student-loan default is often the equivalent of an economic death sentence.

People who attend for-profit colleges have the highest student-loan default rates. A Brookings Institution report documented that almost half of the people in  a recent cohort who borrowed money to attend a for-profit school defaulted within five years.  Another analysis reported that three out of four African Americans who attended for-profit colleges eventually default on their loans.

In my opinion, a good case can be made that the student-loan catastrophe is causing more harm than the opioid epidemic.  Around 44 million Americans have student-loan debt; that's about one American in five. College-loan indebtedness is hampering people's ability to buy homes, save for retirement, and purchase health insurance. Without question, millions of Americans would have been better off if they had never pursued postsecondary education because the indebtedness they took on degraded the quality of their lives rather than enhanced it.

And Secretary of Education Betsy DeVos has has made the student-debt crisis worse. Again and again, she has made decisions that favor the corrupt for-profit industry at the expense of struggling student loan debtors, even debtors who were defrauded by for-profit colleges.

To its credit, the Obama administration crafted regulations whereby students could apply to the Department of Education to have their student loans forgiven if they were defrauded by the college they attended. Thousands of students have applied for loan forgiveness based on fraud claims, including students who borrowed money to attend two bankrupt for-profit institutions: ITT Tech and Corinthian Colleges.

The Obama regulations were to have taken effect on July 1, 2017, but Betsy DeVos stopped the implementation of these regulations, saying she feared students would get "free money." She then appointed a panel of experts to draft new regulations, which won't be approved until next year. In fact, under the DeVos scheme, defrauded students will not be able to move forward on their claims until 2019 at the earliest.

And it appears that many students will not get complete relief from their loans even if they can prove they were defrauded.  DeVos is talking about giving partial relief based on a formula that will compare the defrauded student's earnings to the average earnings among people who participated in similar educational programs.

The cynicism of this approach is shocking. First of all, by delaying the administrative process until 2019, DeVos is giving fraud victims only three options for handling their oppressive student debt. First, they can continue making loan payments on educational experiences that are worthless to them. Second, they can enter income-based repayment plans that will set monthly payments so low that the interest on their debt will continue to accrue, making their total indebtedness grow larger. Or third, they can default on their loans, which will ruin their credit and cause their debt to grow larger from fees and penalties that the debt collectors tack on to their original debt.

DeVos's tactic is nothing more than sneaky manipulation to aid the for-profit industry, which does not want fraud claims to be examined. If Congress had a moral compass and some courage, DeVos's behavior would lead to a formal resolution calling for her resignation.

And thus our elected representatives are willing to allow millions of lives to be destroyed and the integrity of higher education to be degraded rather than reform the federal student-loan program.  In sum, Congress is willing to tolerate human suffering that may exceed the harm caused by opioid addiction. 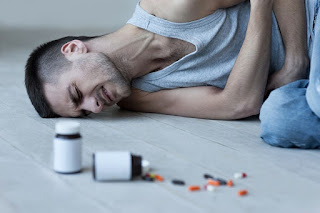 Bob Samuels. The For-Profit College Bubble: Exploiting the Poor to Give to the Rich. Huffington Post, May 25, 2011.

The Opioid Epidemic and The Student Loan Crisis: Is there a link?

James Howard Kunstler wrote one of his best essays recently about America's opioid epidemic, and he began with this observation:


While the news waves groan with stories about "America's Opioid Epidemic," you may discern that there is little effort to actually understand what's behind it, namely the fact that life in the United States has become unspeakably depressing, empty, and purposeless for a large class of citizens.

Kunstler went on to describe life in small towns and rural America: the empty store fronts, abandoned houses, neglected fields, and "the parasitical national chain stores like tumors at the edge of every town."

Kunstler also commented on people's physical appearance in backwater America: "prematurely old, fattened and sickened by bad food made to look and taste irresistible to con those sick in despair." And he described how many people living in the forgotten America spend their time: "trash television, addictive computer games, and their own family melodramas concocted to give some narrative meaning to lives otherwise bereft of event or effort."

There are no jobs in flyover America. No wonder opioid addiction has become epidemic in the old American heartland. No wonder death rates are going up for working-class white Americans--spiked by suicide, alcohol and drug addiction.

I myself come from the desperate heartland Kunstler described. Anadarko, Oklahoma, county seat of Caddo County, made the news awhile back due to four youth suicides in quick succession--all accomplished with guns. Caddo County, shaped liked the state of Utah, can easily be spotted on the New York Times map showing where drug deaths are highest in the United States. Appalachia, eastern Oklahoma, the upper Rio Grande Valley, and yes--Caddo County have the nation's highest death rates caused by drugs.

Why? Kunstler puts his finger on it: "These are the people who have suffered their economic and social roles in life to be stolen from them. They do not work at things that matter.They have no prospect for a better life . . . ."

Now here is the point I wish to make. These Americans, who now live in despair, once hoped for a better life. There was a spark of buoyancy and optimism in these people when they were young. They believed then--and were incessantly encouraged to believe--that education would improve their economic situation. If they just obtained a degree from an overpriced, dodgy for-profit college or a technical certificate from a mediocre trade school, or maybe a bachelor's degree from the obscure liberal arts college down the road--they would spring into the middle class.

Postsecondary education, these pathetic fools believed, would deliver them into ranch-style homes, perhaps with a swimming pool in the backyard; into better automobiles, into intact and healthy families that would put their children into good schools.

And so these suckers took out student loans to pay for bogus educational experiences, often not knowing the interest rate on the money they borrowed or the payment terms. Without realizing it, they signed covenants not to sue--covenants written in type so small and expressed in language so obscure they did not realize they were signing away their right to sue for fraud even as they were being defrauded.

And a great many people who embarked on these quixotic educational adventures did not finish the educational programs they started, or they finished them and found the degrees or certificates they acquired did not lead to good jobs. So they stopped paying on their loans and were put into default.

Does this scenario--repeated millions of time across America over the last 25 years--drive people to despair? Does it drive them to drug addiction, to alcoholism, to suicide?

And even if it does, who the hell cares?