It's Awful Quiet Out There in the American Economy: Is It Time for Americans to Circle the Wagons?

I grew up when western TV series dominated the airwaves: Gunsmoke, Have Gun Will Travel, Bonanza, etc. My childhood was one long cowboy show punctuated by irritating interruptions to eat and go to school.

How many times did I see that hackneyed scene of the settlers with their wagons in a circle, preparing to fend off an Indian attack?  Often the hero of the episode—Ward Bond maybe—would stand behind the wagon barricade staring into the darkness. He would hear a bird call—Native Americans signaling each other!

Then a trusted sidekick would say, "It's awful quiet out there." And the hero always responded laconically by saying, "Yeah, too quiet." And when dawn broke, all the Indians in Christendom would come howling down on the beleaguered settlers. Fortunately, the cavalry always galloped to the rescue just before the commercial break. "We're saved!"

Well, it's awful quiet out there in the American economy.  Life seems chaotic if you watch cable news—all those video clips of people rioting and burning down the cities. But who wants to watch that stuff?

The stock market is doing fine, and millions of Americans are getting regular handouts from the government—payroll-protection checks, enhanced unemployment benefits, student loans. Tax breaks for the wealthy and food stamps for the poor. What could be lovelier?

But maybe it's too quiet. Why is gold drifting toward $2,000 an ounce while 10-year treasury notes earn only one-half of one percent interest? Why are people buying guns who never bought guns before? Why are people hoarding ammunition?  Why have Americans developed a sudden interest in growing their own food?

Even our television commercials are signaling that we have reason to worry. When we watch television, what do we see? William Devane at a country estate peddling gold. Tom Selleck trying to persuade elderly people to take out reverse mortgages. Joe Namath, hawking health insurance for people on Medicare. 'Get the healthcare coverage you deserve,' Namath tells us.

Yes, it's too quiet. Ward Bond would tell us it's time to circle the wagons. And we know, as we await the catastrophe, that the cavalry isn't coming to our rescue this time.

God Bless John Prine! "Try to find Jesus on your own" 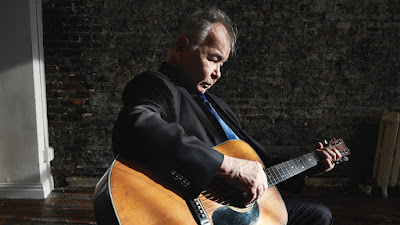