Why Doesn't the Federal Government Just Cancel All Student Debt? To Find the Answer, Take a Look at Our National Balance Sheet

When Joe Biden was running for President, he said he would cancel $10,000 of every college borrower's student debt if Congress consented. But Congress hasn't acted.

Senators Elizabeth Warren and Charles Schumer have urged President Biden to cancel $50,000 of every borrower's federal student loans, saying he has the executive power to do so. But that hasn't happened either.

Why not? Given the hardship that student debtors are experiencing--especially since the COVID crisis began--why not just wipe the slate clean and cancel all $1.7 trillion in federal student debt?

In my opinion, President Biden and most members of Congress would like to cancel all student debt. After all, there are about 45 million student borrowers, and canceling their student loans would make them all very happy.

But Congress can't do that, and neither can President Biden. And here's why.

Student loans are carried on the nation's balance sheet as assets. As of September 30, 2020, the United States held almost $6 trillion in assets, and about a quarter of that amount is listed as outstanding student loans.

As of September of last year, total national liabilities amounted to roughly $32 trillion, resulting in a national debt of around $26 trillion (give or take a few trillion).

Thus, if Congress simply wiped out all those student loans or President Biden canceled them through executive action, the nation's balance sheet would look significantly worse than it already does.  Instead of holding total assets of $6 trillion, our government would have only a little more than $4 billion.

Simply put, the federal government pretends that all that student-loan debt--closing in on $2 trillion--will be paid back.  And that fiction cannot be maintained if Congress wipes out all student debt or allows large numbers of distressed debtors to discharge their student loans in bankruptcy

If you are a student-loan debtor, you have benefited from the moratorium on making monthly loan payments--a moratorium that won't be lifted until May 2022.

But just because you haven't made any student-loan payments over the past two years, don't get your hopes up that Congress will simply forgive all federal student debt.  It won't do it because it can't do it. The Federal government's balance sheet simply can't take the hit. 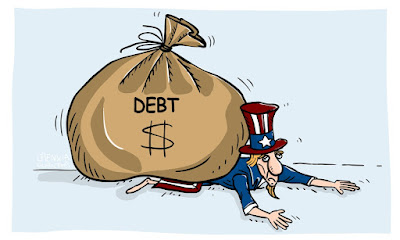