We don't need no stinkin' families (until our homes are flooded): More notes from Redneck Katrina

Children can be such a nuisance. They're noisy. They're expensive. They have absolutely no appreciation for Thai food. It's a good thing we have a constitutional right to abort them.

There was a time when people needed children. Someone had to milk the cows, feed the chickens, and churn the butter.  And children would be such a comfort to us in our old age--remember that quaint old observation?

But now we live in cities. We get our food at the grocery store. When we are too old to live alone, we go to a Golden Age retirement home to play checkers with the other geezers. We rely on Medicare, pensions, and Food Stamps to see us through old age or hard times.  If we do have a couple of children, they most likely live on one of the coasts--far away from Mom and Pop.

And that's just fine until the Amite River starts flowing through the wall sockets of our lovely ranch-style homes, and the power goes out while we're watching CNN News.  And when we call 911, the Emergency Dispatcher puts us on hold with 150 other people.

And so we decide to wait for the National Guard to arrive in their big trucks to rescue us from the flood, but the Guard doesn't know where we live.  And when the National Guard finally shows up, their truck drops us off at an emergency shelter where we can sleep on a cot with 200 other flood victims; and some of those people snore.

Believe me, I know. My wife Kim and I were trapped by flood water last week along with thousands of other people. A lot of those people were milling around on Route 16 hoping the water would subside or a National Guard truck would rescue them.  And the National Guard did rescue a lot of people.  But some people waited a long time before being evacuated.

Our family was more fortunate. My stepson Charlie has a shallow-draft boat, and he rescued my wife Kim, her brother Jim, Kim's parents, and me. And he didn't dump us off at an emergency shelter. He delivered us to my brother-in-law's house in Baton Rouge, where we celebrated our escape by eating jambalaya and drinking Crown Royal on the rocks.

So families can be handy when you need to be rescued from a flood.

Families can also be handy when you are cleaning up after a flood. My wife's parents lived in a subdivision of around 40 homes.  With one exception, every home in the subdivision was flooded.

People who have been through this know that it is vital to "gut" a home as soon as possible to remove all wet sheet rock and insulation. Mold appears incredibly fast after a flood. In just two weeks, a flooded home can become permanently uninhabitable because of mold.

My wife's parents have a big family; and at least ten family members worked four full days to gut their house.  Four generations participated: Ivy and Kitty, the home owners;  all five of their children; at least a half dozen grandchildren; and three great grandchildren.

The home flooded on Saturday night. By the following Friday, Kitty and Ivy's home was completely stripped of all wet sheet rock and insulation; mold treatment had been applied; and the house was ready for a contractor to install new flooring and sheet rock.

Most of Kitty and Ivy's neighbors were not so fortunate. Some were able to do nothing themselves and had to hire demolition contractors. Others had relatives and friends dribble in to help, but not enough volunteers to get the gutting job done quickly.

As debris piled up in front of Ivy and Kitty's home, I could see we were far ahead of the rest of the neighborhood in the demolition process.  By the end of the week, more than half of the homeowners had no debris in their yards, an indication that the demolition process had not even started.

At first, I reveled in my family's progress compared to the neighbors, but as the week wore on it made me sad to see so many homeowners who had absolutely no one to help them cope with the tragedy of this historic flood.

Most of my family are Catholics or lapsed Catholics; and for Catholics, family is a sacred concept. After all, we celebrate the Feast of the Holy Family on the first Sunday of every year; and the Church itself is understood as being part of a family--she is the Bride of Christ.

You'll do just fine until you experience a major disaster of some kind--like a flood or a fire, the loss of a job, a serious illness.  And then you might wish you had a family.

Of course, we love our family members, whether they live close to us or far away. My own children live on the East Coast, and I love them dearly. But I often wish I lived closer to my children, not because they could help me, but because I would like to help them.  The older I get, the more I appreciate how hard it is to be young in the United Sates; and I wish I could help my children more. 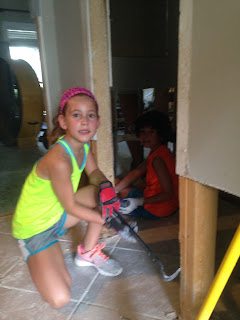