Texas is infested with feral hogs—2.5 million of them, according to a recent New York Times story. In some parts of Texas, wild pigs outnumber people. And they can show up when you least expect them. A few years ago, a captured hog escaped from a trailer and plowed through a Whataburger restaurant.

These pigs are nasty creatures. They dig up crops, destroy fences, and drive out more desirable wildlife. They can be big—400 pounds or more; and they can be dangerous. If you corner a feral hog or get between a sow and her piglets, you can get hurt.

Unfortunately, feral pigs are very hard to eradicate. They are nocturnal animals seldom seen during daylight hours. They are extremely wily and quite suspicious of baited traps.  Texas passed legislation permitting people to hunt them at night and even to shoot them from helicopters; but so far the pig population just keeps growing larger.

The more I learn about feral hogs the more struck I am by the similarities between wild pigs and the unproductive tenured professors who prowl our nation’s university campuses. Like feral 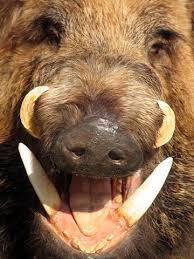 hogs, unproductive tenured professors are generally reclusive creatures who are seldom seen. Nevertheless, although they shun human contact, lazy professors, like wild pigs, can be dangerous if confronted or cornered. And, very much like feral hogs, lazy tenured professors do pretty much whatever they please. Like wild pigs, they snuff along from one academic year to the next, skulking through the academic underbrush and doing the minimum amount of work required to avoid post-tenure review.

It is time for the higher education community to confront the lazy tenured professor--the academic equivalent of a wild Texas hog. It is not fair for America’s college students to take out student loans for their education while universities harbor slothful professors who avoid students, don’t publish, and do little productive work. Anyone who has taught in a public university knows that the unproductive faculty member—protected by tenure—is a serious problem that academia as a whole is afraid to face.

Perhaps higher education could take some lessons from the feral hog experts—who are doing their best to reduce the population of wild pigs. First, the experts say, communities have to admit they have a problem. As Brett Johnson, an urban biologist with the Texas Parks and Wildlife Department, noted a few years ago, some towns refuse to acknowledge they have a problem with feral hogs and are “sweeping it under the rug.” That is a mistake, Johnson said. “Once [feral hogs] get a foothold, the chance of getting control of the problem becomes really difficult,”

Second, the feral hog experts stress, it is important for communities to work together. Sergeant Mike Bedrich, a suburban public safety officer in the Dallas-Fort Worth area, pointed out awhile back that feral hogs cross community boundaries. “Those hogs are traveling back and forth between all of those areas,” Bedrich said, which means catching the hogs must be a collaborative effort. If one town has an aggressive hog control program and the neighboring town does not, “then you haven’t really dealt with the problem.”

Finally, the feral hog experts emphasize, the people trying to trap wild hogs must be as cunning as their prey. For example, the Fort Worth Nature Center uses traps to get rid of its porky interlopers. As the Fort Worth Star-Telegram explained in a 2010 article, the Nature Center’s staff lets the hogs “become comfortable entering the traps in the hope that more will follow.” Robert Denkhaus, the Center’s natural resource manager, stressed that it is very important not to spring the trap too soon. “If the trigger goes too quick and [the animal] gets away, that pig just learned what a trap is,” Denkhaus said.

So what can higher education learn from the feral hog experts? First, like Texas towns annoyed by wild pigs, we in the academic community must admit that lazy tenured professors are a serious problem. Most colleges and universities have a significant number of unproductive faculty members and they contribute to driving up the cost of higher education.

Second, everyone in the academic community must work together to identify and confront the lazy tenured professor. It is not just the provost’s job to maintain academic standards. All professors must do their part to hold their colleagues accountable. That means the departmental compensation committee must stop giving unproductive professors a satisfactory rating when they make their merit pay recommendations.

And—like feral hog trappers, department chairs and college deans must become wilier in documenting the lazy professor’s shortcomings. At a minimum, that means college administrators must stop taking lazy professors' annual activity reports at face value. A professor may list an impressive number of committee assignments on his or her annual activity report. But did the professor attend any committee meetings or do any productive work?

And college administrators need to scrutinize publication records with a bit of skepticism. That one-page article in the annual newsletter of the Oklahoma Association of Medieval Literature Professors —is that really a peer-reviewed scholarly publication? And the book that a faculty member miraculously produces from a dust-covered dissertation—was it published by a reputable academic publishing house or was it ginned out by a vanity press?

I write this not as a university administrator but as a tenured professor myself. Higher education in the United States is under a severe financial strain. Professors in some states are already experiencing salary cuts, furloughs, and layoffs. It is in the interest of everyone in the higher education community—administrators, faculty members and staff—to operate our institutions with maximum efficiency. There is no room in today’s universities for unproductive professors, whether tenured or untenured.

Of course, we shouldn’t take the feral hog analogy too far. Lazy faculty members and wild pigs are not entirely similar. For one thing, feral hogs are incredibly fertile; a sow can produce two litters of piglets in twelve months, and each litter can have as many as ten piglets. Our nation's lazy professors don't have that kind of energy.

B. Hanna. Feral hogs prove to be a nuisance across Tarrant County. Fort Worth Star-Telegram, January 27, 2011.