Awhile back, I posted an essay on Decena v. Citizens Bank, a bankruptcy court case that was decided last year in New York. Lorelei Decena had borrowed $161,000 to attend St. Christopher's College of Medicine in Senegal, West Africa. At the time Decena was studying at St. Christopher's, the school was not on the Department of Education's approved schools list.

After graduating, Ms. Decena returned to the United States to pursue a medical career. To her dismay, she discovered that her St. Christopher medical degree did not qualify her to take her medical boards exams in the U.S.; and she filed for bankruptcy.

As almost everyone knows, student loans cannot be discharged in bankruptcy unless the debtor can meet the "undue hardship" standard articulated in 11 U.S.C. sec. 523 of the Bankruptcy Code. The undue hardship standard applies not only to federal student loans but to private student loans as well. This is a very difficult standard to meet, and some courts have applied it harshly.

Fortunately, for Ms. Decena, the bankruptcy court ruled that her loans from Citizens Bank were not covered by the undue hardship rule because St. Christopher's College of Medicine was not on the Department of Education's approved schools list when she studied there. Thus her student loans could be discharged in bankruptcy like any other consumer loan.  A great victory!

A few days ago, I was contacted by another New Yorker who had borrowed about $160,000 in student loans from Citizens Bank to attend a medical school in Great Britain. This school, like Decena's school, was not on DOE's approved schools list when he attended. And somewhat like Decena, this New Yorker discovered that his overseas medical degree does not qualify him to practice medicine in New York.

Obviously, this fellow has a very good argument that his student loans can be discharged in bankruptcy in the same manner as Ms. Decena's loans.  He contacted Citizens Bank and was told that the bank had sold the loan to a debt collection company.  He then wrote the debt collector and enclosed a copy of the Decena case. So far, no response.

What's going on here? Is Citizens Bank routinely making student loans to people enrolled in overseas medical schools?  And is it lending money to people attending foreign schools that are not on the Department of Education's approved schools list?

Although it is not well known, the Department of Education gives out student loans for Americans to attend foreign colleges and universities; and there are universities from all over the world on DOE's approved schools list.  Some of these institutions are foreign medical schools.

In my view, the government should not be lending money for people to study at foreign universities. The United States has plenty of colleges. Moreover, post-secondary enrollments are in decline in the U.S.; and there are lots of empty seats at American institutions.

And I don't think private banks should be lending money to people so they can study at foreign medical schools, particularly when it is unclear whether a foreign medical degree qualifies graduates to practice medicine in the U.S.

But if our government and the banks are going to continue the reckless practice of handing out student loans for people to study in foreign countries, then the people who accept those loans should be able to discharge their student debt in bankruptcy if they discover that their foreign degrees are worthless to them. 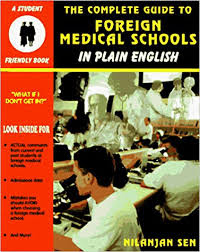 Posted by Richard Fossey at 1:10 PM