Always Leave a Rat a Way Out: An Old Guy's Misgivings About the War in Ukraine

When I was a young man practicing law in Alaska, my senior partner gave me some advice I never forgot. Several times during my legal career, I had an opportunity to completely devastate a nefarious party that had pressed a frivolous claim against one of my clients.

"I've got you now," I told myself as I made plans not only to defeat my opponent but to humiliate and destroy him. In these cases, my senior partner always cautioned prudence and restraint. "Richard," he would say, "always leave a rat a way out."

And he was right. I learned that a party pressed to the wall almost always lashes out viciously and behaves recklessly to the detriment of everyone--good guys and bad guys alike.

So far, President Putin's war against Ukraine has not gone well for the Russians. To almost everyone's surprise, Ukraine has beaten back the Russian invasion, inflicting heavy casualties. The Ukrainians have destroyed countless Russian tanks, airplanes, and even the flagship of Russia's Black Sea fleet.  The Ukrainians have been so exhilarated by their battlefield successes that President Zelensky promises to evict the Russians from Crimea, where they have been since 2014 (and centuries before that).

What fun! In America, the elite media crows with delight. How delicious to rub Mr. Putin's face in the mud.

We should remember, however, what George Orwell said about war. "One of the most horrible features of war," he observed, "is that all the war propaganda, all the screaming and lies and hatred, come invariable from people who are not fighting."

With a few rare exceptions, the reporters who work at the New York Times, Washington Post, and CNBC are not being shot at. If the Ukraine war escalates, their children won't be drafted. Their paychecks, restaurants, and expense accounts won't be affected. The beaches of Martha's Vinyard and the Hamptons will be pristine and peaceful no matter what happens to the Russians and the Ukrainians.

We should remember, however, that Russia is a nuclear power. We may sneer at Putin's threats to unleash tactical nuclear weapons. We may comfort ourselves that Russia is merely a regional power, unlike the mighty United States, which is supposedly the most powerful military power in the world.

Nevertheless, we should always leave a rat a way out.

Our diplomats and political leaders may consider Ukraine an American playground that can be manipulated like a child's toy. Perhaps they have not read about Stalin's Holodomor or the savagery of the Russians and the Germans in the blood lands of Ukraine and Belarus during the Second World War.

Of course, I'm some old guy living in Flyover Country. What do I know compared to the policymakers and political strategists who got their degrees from Harvard, Yale, and Georgetown?

However, I've done a little reading, and I recall that Hitler woefully underestimated the Russians when he launched Operation Barbarossa in the summer of 1941. The Germans pushed the Russian army back to the outskirts of Leningrad, Stalingrad, and Moscow, but in the end, Russian soldiers showed up in the streets of Berlin in May 1945. I'll bet the Germans wished they had let Russia alone.

And Napolean, one of the world's greatest military strategists, lost his entire army when he foolishly invaded Russia in 1812. By the time that adventure ended, little Nappie had lost ninety percent of his army, with the survivors reduced to cannibalism.

So let the United States strip our nation's arsenals to give high-tech weapons to the Ukrainians.  Let's see how it works out. As for me, I don't want my grandchildren fighting in Europe in a war that got out of control because the western powers didn't leave a rat a way out.

Department of Agriculture Wants Farmers to Grow Two Crops a Year: I'm From the Government, and I'm Here to Help

The world's grain supplies are threatened by the war in Ukraine, one of the world's largest wheat producers. In fact, Ukraine and Russia together produce a quarter of the world's wheat.

The U.S. Department of Agriculture, always ready to lend its expertise, wants farmers to start growing two crops yearly instead of one to help meet the global demand for grain.

Those dumb farmers. It's a good thing that the federal government is telling them what to do, or we'd probably all starve to death.

But here's the thing. American farmers are already doing everything they can to maximize the productivity of their land. In Louisana, some farmers are harvesting crawfish in their rice fields. Alfalfa farmers get anywhere from four to six cuttings a year--depending on rainfall and weather conditions.

My father farmed winter wheat in the Washita valley of southwestern Oklahoma. He planted in the fall and harvested in the early summer. And, like wheat farmers all over the United States, he often planted a second crop after plowing the wheat stubble.

Here's my point. Centralized control of agriculture can be dangerous. Stalin tried to control grain production in Ukraine in the 1920s by driving small farmers off their land and forcing them onto collective farms.

You can read about this sad episode, commonly called the Holodomor, in Anne Applebaum's book, Red Famine: Stalin's War on Ukraine. Mr. Jones, a 2019 movie starring James Norton, also tells the story of the Holodomor.

I don't think American farmers will suffer from federal agricultural policies like the Ukrainian kulaks did. Nevertheless, we should be skeptical of news stories that tout the wisdom of national farm policies as if the farmers in flyover country don't know what in the hell they're doing.

In fact, farmers are among the few people in America who do know what they're doing. We would all be better off if we had more farmers in Congress and fewer lawyers.

Posted by Richard Fossey at 8:39 AM No comments:

Will Americans Starve This Year? Probably Not, But Lets Plant Gardens Anyway

A few days ago, Chris Martenson posted a blog essay titled "Will You Starve to Death This Year?" Martenson pointed out that escalating prices for natural gas have led to a global rise in fertilizer costs.  The price of diesel, which runs the world's farm tractors, has also shot upward dramatically, contributing to a sharp increase in food prices. A ten percent decline in global food production, Martenson argued, would be catastrophic.

Other people are beginning to worry about food. On television, I'm now beginning to see ads from emergency-food-supply companies--the outfits that sell food packets that can be safely stored for up to 25 years.  Is it time to stock up on canned goods?

I don't think Americans are in danger of starving to death--in the short term, at least. We live in a great country blessed with fertile soil, a temperate climate, and the advanced technology we need to feed a nation of 330 million people.

The American consumer is paying more for food, and we can't always get the food we prefer due to kinks in the supply chain. But nobody will die of hunger in the U.S., at least not in the near-term future.

Nevertheless, Americans should not take our food for granted. I've been reading about famines, and history tells us that people can starve to death even in countries that export food.

Several million people starved to death during Ireland's Potato Famine of 1845-1849, even though the British government exported food out of Ireland. Almost four million Ukrainians died of hunger in 1932-1933 due to Stalin's order to seize food stocks from peasant farmers, even while the Soviets were exporting food to Europe.

Anne Applebaum, who wrote a masterful history of the Ukrainian famine, described how people react when they don't get enough to eat. First, hungry people respond with anger and violence--especially if they have access to firearms. Eventually, however, starving people fall into lethargic apathy and quietly die.

In The Great Hunger, the best treatment of the Irish potato famine, Cecil Woodham-Smith explained how mass starvation always leads to epidemics. Disease invariably follows when the living become too weak to bury the dead.

I am also convinced from my reading that mass starvation inevitably leads to cannabilism, even in advanced societies. The starving people of Leningrad began eating the dead during the Nazi's 900-day siege of the city, as did the Ukrainians during the Holodomor. During World War II, German prisoners of war descended into cannibalism when the Russians penned them up and allowed them to starve to death.

Americans have been blessed by abundant food for so long that we've forgotten its importance. We can eat whatever we want--from Russian caviar to Chicken McNuggets, and the grocery stores are always open.

Nevertheless, I think it is time for us to think about food.  We still have plenty to eat, but the grocery-store shelves no longer have everything we desire. And food prices have gone up alarmingly over the last few months.

Martenson concluded his sobering essay by urging his readers to plant gardens. I agree. I have been gardening for about ten years, and I now grow both a spring and a fall garden.

My little vegetable garden can't sustain my family for any length of time, but I am learning how to tend my crops, how to spot and treat diseases, and when to fertilize and harvest.

Just as importantly, raising my own food is fulfilling on a spiritual level.  Planting a seed and seeing it grow into a bean plant that twines around a trellis and produces something I can eat is a miracle. And nothing tastes better than a home-grown tomato picked from my own garden.

As Guy Clark observed in a famous song, "What would life be without homegrown tomatoes?"  Indeed it would not be nearly so sweet. 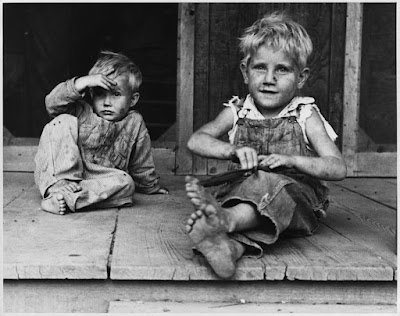 Posted by Richard Fossey at 12:28 PM No comments: