College Enrollments are Down, Tuition Prices are Up & Student-Loan Forgiveness Is on the Way: The Wounded Grizzly Syndrome

Some states saw more significant declines than others, and some saw enrollments grow. California suffered an 8.1 percent decline, the most significant drop among the states.

New Hampshire's student population actually grew after the pandemic hit, mainly due to increased online enrollment. I imagine a lot of that growth can be attributed to the University of Southern New Hampshire, which aggressively markets its online programs.

Not to worry, BU tells us on its website. Each year the university awards almost a third of a billion dollars in financial assistance to undergraduates. In other words, BU assures us, most students won't have to pay the sticker price.

Indeed, colleges all over the United States are slashing tuition to lure students through the door. The National Association of College and University Business Officers said that schools are discounting tuition for first-year students by 54 percent on average.

Four out of five undergraduates will get a tuition discount in the coming academic year, NACUBO reported. So if you pay the total price to attend BU, you got suckered.

For more than a quarter of a century, colleges have raised their tuition prices annually above the cost of inflation. But the party is about to end.

Young people are beginning to wonder if it makes sense to borrow $100,000 or more to get a liberal arts degree from an elite school if their diploma doesn't lead to a good job.

With inflation running at a 40-year high, most colleges can no longer raise their tuition prices to cover their increased costs. BU's tuition hike of 4.25 percent is below this year's 8 percent inflation rate.

The Biden administration is signaling that it will forgive at least some student debt.  During the election campaign, Mr. Biden promised to grant $10,000 in student debt relief to students from lower-income or middle-income families. According to a recent Washington Post story, Biden will likely keep that promise.

I hate to break the news to you, President Biden. Ten thousand dollars in debt relief ain't nearly enough.  Millions of students have seen their total debt double over the years due to accrued interest.

Offering to forgive $10,000 in debt to someone who owes $60,000 is like shooting a grizzly bear in the gut. The shot doesn't kill the bear; it just pisses him off.

President Biden has asked Education Secretary Miguel Cardona to prepare a memo on the president's legal authority to cancel up to $50,000 in student debt.

If he did that, the experts tell us, President Biden would forgive all college-loan debt for 36 million people--about 80 percent of all borrowers.

Is that a good idea?

Sort of. Anything the federal government does to provide relief to distressed student-loan debtors is good, so I support a massive cancelation of student debt.

Wiping out student debt without reforming the student-loan program is like fixing a flat tire on a broken-down car and then putting it back on the highway with no brakes. Someone down the road is going to get hurt.

The whole damned, rotten student-loan system has to be torn down. Otherwise, the corrupt, venal, and incompetent American higher education system will continue ripping off the American people.

Obviously, massive reform can't be accomplished overnight.  But here is what we need to do for starters:

1) Congress must remove the "undue hardship" clause from the Bankruptcy Code and allow insolvent student-loan debtors to discharge their loans in bankruptcy.

2) We've got to shut down the Parent Plus program.

3) The federal government has got to stop subsidizing the for-profit colleges, which have hurt so many young people--especially people of color and low-income people.

4) We've got to stop shoving student borrowers into 25-year, income-based repayment plans that are structured such that no one in these plans can ever pay off their loans.  There almost 9 million people in IBRPs now.

6) Finally, we must restore the integrity of the nation's law schools.  We've got too many mediocre law schools. California alone has more than 50 law schools, with only 18 accredited by the American Bar Association.   And the law schools need to go back to admitting students based on objective criteria--the LSAT score, in particular.

If we had fewer but better-trained lawyers, we'd have less litigation and fewer attorneys who see their job as being hired political hacks.

Will the Biden administration do any of the things I've outlined? I doubt it.

Higher education is in desperate need of reform. A college education is far too expensive, and much of what is taught at the universities is not useful.  Wiping out student debt will bring some relief to millions of college borrowers. But if the colleges don't change how they do business, the student-debt crisis will not be solved. 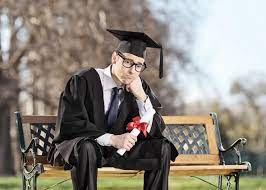 Posted by Richard Fossey at 2:42 PM No comments:

Top Democrats, led by Senators Chuck Schumer and Elizabeth Warren, are calling on President Joe Biden to forgive student-loan debt up to $50,000 per person.

According to the plan's proponents, $50,000 in debt relief would wipe out all college-loan debt for 36 million Americans. That would be an impressive achievement.

Moreover, forgiving $50,000 in student debt would particularly benefit women and people of color, who take on more debt on average than men and non-minority students. Under one interpretation of the proposal, parents who took out Parent Plus loans might also get relief.

Without a doubt,  student-loan forgiveness on this scale would be expensive. The federal government would be writing off  $1 trillion in student debt. But, as then Education Secretary Betsy Devos admitted more than two years ago, only one out of four federal-loan borrowers are "paying down both principal and interest" on the loans.  Writing all this debt off in one fell swoop would merely recognize reality.

Some policy experts argue that writing off all student debt--about $1.7 trillion--would be good for the American economy. In a 2018 report, researchers at the Levy Economics Institute of Bard College wrote that wholesale student-loan forgiveness would boost the Gross National Product by $86 billion to $108 billion a year over ten years. Released from their student loans, millions of Americans would see an immediate increase in their disposable income, permitting them to buy homes, save for retirement, purchase consumer goods, and start families.

But wiping $1 trillion of student debt off the government's books is no panacea for the student-loan crisis.

First, there is the issue of fundamental fairness. Millions of Americans made enormous sacrifices to get through college with no debt--often working at part-time jobs to make ends meet. Millions more lived frugally in the years after graduation to pay off their student loans.

Somehow it seems unjust to reward people that borrowed to attend college when so many people worked extra hard to avoid debt or to pay it off quickly.

What reforms are most urgent. In my view, colleges should stop grinding out expensive and often worthless graduate degrees. When Congress passed the GRAD Plus Act, it allowed people to borrow the entire cost of graduated education, no matter what the price.  As we might have expected, universities raised the price of their graduate degrees. They ginned out new programs: MBAs, Master's degrees in public administration, graduate degrees in gender and ethnic studies, and so on.

Second, we need to close down the Parent PLUS program, which has driven millions of moms and pops to the verge of poverty by taking out loans for their children's education that they can't discharge in bankruptcy.

In my view, it would be wiser to loosen the restrictions on bankruptcy relief for overburdened student debtors. People who took out student loans and obtained good jobs with their college degrees should pay back their loans. People whose lives were ruined by student debt could get a fresh start in the bankruptcy courts.

Surely all Americans can agree that postsecondary education should improve the quality of people's lives. College degrees that leave people with no job and massive student debt should not be subsidized by the federal government.

Posted by Richard Fossey at 9:03 AM No comments: