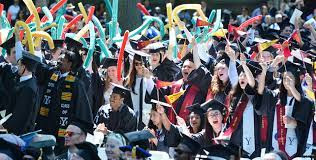 Posted by Richard Fossey at 8:33 AM No comments:

"If I knew then what I know now, I probably would have skipped college": Freshman enrollment is down 13 percent at 4-year schools

What accounts for this exodus? The COVID pandemic partly explains it. Colleges switched from classroom teaching to online instruction in the spring of 2020, which was decidedly inferior. Undoubtedly, many students have decided not to go back to college until the professors resume teaching face-to-face.

But COVID is only a partial explanation for the student-enrollment downturn.  Cost is a huge factor. It now costs about $75,000 a year (including room and board) to attend a private liberal arts college--$300,000 to get a four-year degree.

Private schools have slashed freshman tuition by more than 50 percent to lure new students through the door, and almost all first-year private-college students now get some sort of discount.

But for most schools, that strategy has not been successful. Enrollments continue to drop.

But there is a third factor that helps explain plummeting college enrollment.  Students have figured out that a four-year college degree is no guarantee of a good job--particularly a degree in liberal arts or the social sciences.

Many employers no longer require new employees to have a college degree, including Apple, Google, IBM, and Bank of America. Young people have discovered that a vocational-school certificate may lead to a better job than a four-year degree in gender studies.

For example, CNBC carried a story about a young person who left college to enroll in a 14-week coding boot camp, "If I knew then what I know now," the former college student explained, "I probably would have skipped college."

As a guy who spent 25 years as a college professor in the higher-education gulag, I'm glad to see college enrollment declining.  Too many students ruin their lives by taking out student loans to get vacuous college degrees from institutions that don't teach students to think or solve problems.

Colleges have hired market firms and "enrollment management" administrators to attract warm bodies back into the classroom. But young people are beginning to wise up. Small liberal arts colleges, in particular, are struggling to survive as their student enrollment shrinks.

More and more young Americans have come to realize they can have a good life without going to college. Unfortunately, some college students don't figure that out until they have destroyed their financial future by taking out too many college loans.

Posted by Richard Fossey at 10:47 AM No comments:

Happy New Year! Your middle-class status has been revoked and a college degree will not get you reinstated

As 2020 comes to a close, you may think 2021 will be a better year. And if you are among the nation's wealthiest Americans, things look pretty rosy.

But if you are a middle-class person, next year will be worse for you than 2020.

Over the past 40 years, earnings for the top one-tenth of one percent of Americans has grown 15 times faster than income for the bottom 90 percent.  Wages as a share of the national economy have been going down for the last half-century.

You know that because you saw how wages went up for your parents' generation, but are not going up for working people today.

If the top 10% own 90% of the wealth and has captured virtually all the income gains of the past 20 years, then isn't it obvious America has no middle class? What the traditional middle middle class . . . owns is debt . . . .

Nowhere is this more obvious than when we look at the massive debt that gullible Americans have taken on to get a college degree in the pathetic hope that a diploma would get them into the middle class or keep them from falling out of it.

As Mr. Smith pointed out, Americans are burdened by "$I.7 trillion in student loan debt burdening those who bought the narrative that a college diploma was a passport to the security of the middle class. The debt load carried by those clinging on to aspirations of middle-class security is staggering."

Indeed, "burdening powerless students with uncertain futures with trillions in high-interest debt would have been viewed as criminal two generations ago, but now it's celebrated by those reaping interest from precarious debt-serfs."

The poor saps who have been plunged into poverty by their student loans cannot discharge their debt in bankruptcy courts, and they got nothing but crumbs from Congress's so-called coronavirus relief legislation.

College presidents--most of whom make more than half-million dollars a year, whined to their legislators about how much the pandemic was costing them, and Congress bailed them out. But did even one of these charlatan bozos urge some relief for their ex-students who are groaning under the burden of student loans they can never repay? No, they did not.

If Americans graduated from colleges and graduate schools with useful skills, they would earn enough to pay off their student loans quickly--within 10 years at least. But they are not acquiring practical skills--especially if they majored in the liberal arts or the social sciences.

As for possessing skills, much of the workforce has few producer skills, as the consumer economy devotes inordinate attention not to producing but to marketing, speculation and complying with counterproductive regulations and bureaucratic file-shuffling.

But our fun-house economy cannot continue indefinitely with the superwealthy exploiting the rest of us while the government prints money and runs up the national debt--now pushing $28 trillion. As Smith observed:

Once the con of printing trillions of dollars out of thin air dissolves and the nation has to balance its books in the real world, these file-shuffling and speculative skills will no longer generate meaningful income.

Those of us in the bottom 90 percent of the nation's earners can do very little to stop the downward spiral in our wealth and income.  But at least we can advise our children not to take out student loans to get worthless college degrees, useless MBAs, obscenely expensive law diplomas, and meaningless doctorates.

Posted by Richard Fossey at 1:48 PM No comments: