Fighting for milk: Now is the time to take any kind of work you can get

In the movie Cinderella Man, Russell Crowe plays the part of James J. Braddock, a professional boxer who breaks his hand in the ring, forcing him to leave his chosen profession and work as a common laborer. Then the Depression comes, and Braddock's family faces starvation. Braddock returns to boxing with ferocious intensity and winds up winning the World Heavyweight Championship.

Washington Post columnist Michelle Singletary made a similar point to people who have been laid off or furloughed from their jobs.  "Apply for any kind of work," she advised. Despite the economic downturn, some companies are still hiring, and all jobs bring in at least some money.

There was a time when experts advised people not to take menial jobs if they had been laid off from a professional position. A stint as a restaurant worker does not look good on the resume of someone who applies for a job as a financial analyst.

Also, many employers are reluctant to hire people who appear to be overqualified for the jobs they are seeking. Unemployed lawyers, for example, have difficulty getting employed as paralegals because the law firms believe that a licensed attorney working as a paraprofessional will be perpetually dissatisfied.

But these are desperate times, and they are becoming more desperate. If you have a home and a family, it makes sense to take any kind of work at all--any money you earn helps protect what is important to you.

After all, as the cinematic version of James Braddock showed us, working for milk is a dignified occupation.


Posted by Richard Fossey at 2:43 PM No comments:

"If I were a carpenter": Manual skills will be more valuable than a liberal arts degree in the post-coronavirus economy

If I were a carpenter, and you were a lady
Would you marry me anyway?
Would you have my baby?

James Howard Kunstler wrote somewhere that in the coming age, carpenters will be more valued than people who design video games (or words to that effect). Kunstler's observation worried me because I have no mechanical skills at all, although I am a pretty good gardener.

Kunstler is right, and the coming age is now. Coronavirus is transforming the American economy. Millions of jobs have been lost that won't come back. All of a sudden, it matters if a person has real skills. A carpenter is going to be more valued in the years ahead than a sociology professor.

Americans have indulged themselves in the acquisition of meaningless university degrees--hundreds of thousands of degrees, and they will soon learn that all the millions of hours spent in university classrooms won't help them feed themselves.

I should know. I have been a university professor for 25 years, and I sat on dozens of dissertation committees. I would be embarrassed to list the titles of some of the dissertations I approved.  I remember one doctoral student at the University of Houston who wrote his thesis on what it felt like to be a graduate student.  I feel sure he is a tenured professor at some obscure regional university.

During my years in the Alice and Wonderland world of higher education, I stumbled across several instances of plagiarism. No plagiarist I discovered was ever kicked out of graduate school.  We treated plagiarism like a punctuation error--easily corrected.

All this foolishness was financed by the federal student-loan program, the Pell Grant program, and various forms of state and federal government support. And most of the people who acquired frothy university degrees got jobs--often soft-skill jobs in the public sector.  But few people who collected these degrees learned how to make anything useful.

Of course, not all higher education is vacuous. Programs in engineering, the medical profession, law, and accounting all teach useful skills. And several of my colleagues in my own field, which is education, are excellent scholars and dedicated teachers. I cast no aspersions on their work. But in general, the fields of education, liberal arts, and social studies offer degrees that lack real substance.

As I write this, nearly 17 million Americans are out of work, and this is just the first wave of job losses. Before the end of this year, people in government and education are going to feel the cold breath of a new Depression.  Experts reasonably predict that the unemployment rate in this country will reach 30 percent.

The world of higher education is in for a rude shock. Slovenly professors, who did very little work and made rare appearances on campus dressed in gym clothes, are going to lose their cushy sinecures.  If they are smart, they will acquire a craft skill and retool themselves as carpenters, plumbers, electricians, or technical workers.

As the job market for college professors collapses--and it will collapse, few laid-off professors are going to find new positions in academia. So If they don't retool, they will be forced on the dole, subsisting on food stamps and living with someone who has a real job.

As for the people who took out student loans to get frivolous degrees, they are going to find it damned difficult to get a decent job and even more challenging to pay off their student debt. They, too, will need to master a useful skill if they aspire to own a home, get married, or have children. 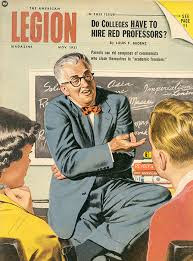 Posted by Richard Fossey at 11:26 AM No comments: